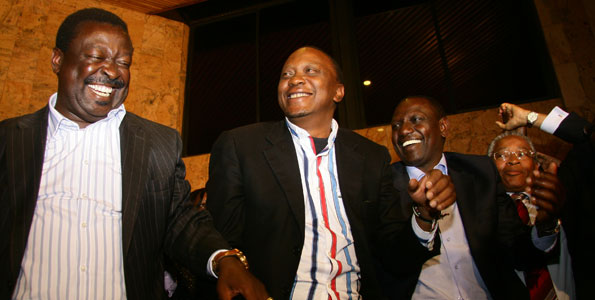 The story of Mudavadiâ€™s defection speaks of a desperate, desolate and dejected man, whose re-sale value has completely diminished.

Thereâ€™s a likelihood that Uhuru Kenyatta would not be running in 2013. As a plan B, TNA/URP think-tanks are exploring ways in which Uhuru/Ruto can remain relevant if he doesnâ€™t run.

The Leaked options reveal the unfolding of an Evil Strategy that TNA think tanks are considering to make him retain his influence as a De-facto head of the nation.

Of course you and I know they are lying to him to continue drawing candies from the cookie jar.

The options include setting up a Communist style Chinese or Russian type of Politburo,

The basic strategy was to have Mudavadi join the Jubilee Coalition before they can support his candidature.

He was also threatened with the Makaburi scandal being revived against him and denial of UDF nomination certificate by the state operatives who registered UDF.

Now, with the 50:50 seats already shared between Uhuru and Ruto, MM as president would only rubberstamp cabinet decisions and appointments.

However, they made a non-binding word of mouth promise that they would each relinquish 5% each, which means MM, would control 10%. Thatâ€™s the plan. That would make the deal 45:45:10. But remember the 10% is not on paper. It is just a word of the mouth promise that was made much later to convince him to join Jubilee.

Mudavadi demanded at least an affidavit but they declined. These guys are smart. They told him to just swear allegiance to them, which he did. He had no option; all the top 3 positions had been taken. Wetangula represented the Western interests. Busia is under lock and key. And with Wetangula and Eugene, Bukusus are firmly in CORD. So Vihiga remains the only battleground in Luhyaland. And Marende is total CORD.Â  Speaker Marende will deliver Vihiga, once he hits the ground running. That is how Raila will take Western. MMâ€™s goose is cooked.

Jubilee is Â planning to establish a six member Uhuru- led Communist style Russian type of Politburo with Ruto as the Deputy along the lines of 1991 banned Communist Party of Russia stuffed with his praise singers like Jamleck Kamau, Waititu together with young ambitious but broke elites like Onyango Oloo and Sakaja John.

Uhuru would appoint two members and Ruto two of the five members, and in which the puppet president would not be a member. This body would have the powers to discipline even a sitting president!

That way, the ruling party machinery would be in Uhuru and Rutoâ€™s control. URP and TNA axis would be in control of party nominations meaning, they would give direct nominations to their preferred candidates at all levels.

With party instruments firmly under their control, Uhuruto would continue to puppeteer Mudavadi at will. The president would reign but Uhuru and Ruto would rule.

The Jubilee Coalition, as it would be called, would in such a scenario, incorporate aspects of the South African National Congress Model that saw Mbeki fired by the then party Leader Jacob Zuma.

They plan to amend the constitution to make it easy for them to fire Mudavadi if he decides to co-operate with the ICC or pander to the West. With recent MPs who were bought by TNA, the Uhuru-Ruto has most of the MPIGS and could easily buy a few more and push through amendments of the PPA to incorporate the disciplinary elements of Jubilee.

Under such an arrangement, MM as the likely puppet candidate would rule at the behest of head of Politburo- UHURU. Â His recent pledge of allegiance to the Jubilee coalition is part of that wider plot.

That is why Mudavadi was made to sign lopsided pre-election agreements, in which Uhuru-Ruto led Politburo would appoint all ministerial positions.

That is why Uhuru wants to create a massive coalition with a clear majority to enable him incorporate aspects of this plan into the constitution. Is Constitutional coup in the making? Only time will tell.

Ok I wish the Jubilee thing good luck in their fantasies. Mudavadi of all the people, now that is despair, True Railaphobia, A smell of defeat! Uhuru is scared of bearing the shame of loss himself. He wants to use MM as a human shield, so that it is Mudavadi who will get to lose the presidencies.

All opinion polls conducted by his pollsters show Raila winning in a landslide under any imaginable hypothetical match-up. Now forget the Ipsos ones that are published, thereâ€™s the true data that is given to the financier of the poll, and it says the truth. It is based on those numbers that Uhuru has sensed defeat, and is planning to surrender to Railonzo, by withdrawing from the race.