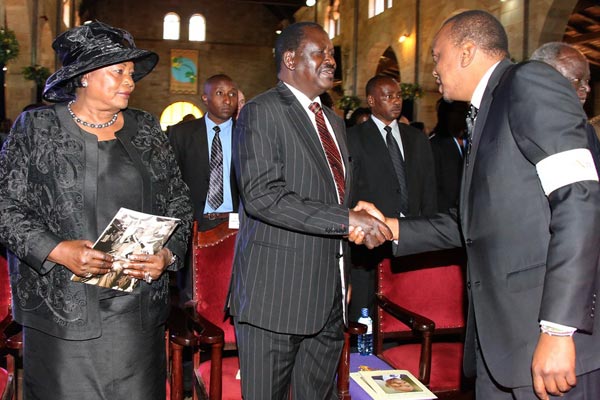 It only took a handshake & eye contact and Uhuru was already sending signals, he could not hold it anymore, he had to declare publicly that he had no problem with Raila and that he wanted to work closely with him;

â€œI can see my brother Raila here, and I can assure him that I have no problem. I look forward to working with him and I believe that is what Kenyan people want of us. To pull together just like leaders of the past did,â€ Uhuru proclaimed.

He added that there should be no time for squabbles and unnecessary fights among leaders as they should work together for development.

Apparently the scene had been set by retired President Mwai Kibaki who in his characteristic mavi ya kuku style wondered why Uhuru was wasting so much time and resources fighting the amazing Raila Amollo Odinga.

Addressing Uhuru and Prime Minister Odinga, baba Jimmy and husband to Lucy said: â€œSquabbling amongst yourselves, you will not achieve very much.â€

It started with alleged rigging at Bomas, then withdrawal of government security, then vandalizing of Raila’s company -Specture International…. hmmm it later continued to withdrawing escort cars, then the big shocker- YES, the Kimemia memo directing Kenya Airports Authority not allow Raila near any VIP lounge in any of the airports in Kenya…..that was mean and stupid, I guess whenever Uhuru remembers goose bumps hit ..

After blocking Raila from using VIP lounge at JKIA Uhuru’s men continued frustrating him, they could call him and his followers names… and the latest and perhaps what makes Uhuru feel guilty >>>hmmm YES, you got it ! blaming Raila for the Mpeketoni killings and even inventing theories that Alshabaab were hired by the opposition to eliminate a certain community. well, we know even Luyha, Kamba, Kisii, mijikenda et al were in the list of those killed.

But seriously, where on earth can you hire an Islamic extremists? if Muslim fundamentalists were out for hire am sure America could have bought out all Al Qaeda and any other Mujaideen around the world.

All am trying to say is that Uhuru may have shown some remorse out of guilty na bado, as long as he keeps the ‘bad advisors’ he continues to accumulate more to apologize for come 2017….