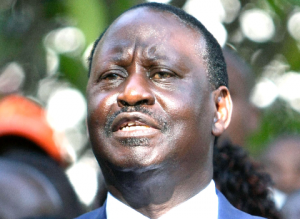 Uhuru Administration: When government fears the people, there is liberty. When the people fear the government, there is tyranny
By Jacktone Ambuka

The 3rd president of the United States, Mr. Thomas Jefferson once opined: â€œWhen government fears the people, there is liberty. When the people fear the government, there is tyranny.â€ These words of Jefferson drove me into contemplative mood this week in the wake of what appears to be state sponsored intimidation, blackmail and harassment against Mr. Eliud Owalo-Key aid of former Prime-Minister Mr. Raila Odinga.

For the starters, Mr. Owalo was summoned by Criminal Investigation Department (CID) to â€œclarify some issues.â€ It is unclear what these â€œissuesâ€ are. However, since he wrote a commentary that was published by The Standard in which he articulated reasons why Independent Electoral and Boundaries Commission (IEBC) should be disbanded, Mr. Eliud Owalo has been turned into an â€œenemy of the state.â€ Claims and counter claims that Mr. Owalo is planning to destabilize Uhuru government and initiate Egypt like revolution are rife.

Yet, what Mr. Owalo articulated isnâ€™t unfamiliar. Neither is it new. It is a school of thought that resonates with CORD leader and former presidential candidate Mr. Raila Odinga. Moreover, about a half of Kenyans agree that IEBC should be disbanded. Against the backdrop of dwindling public acceptability, IEBC is experiencing credibility and integrity crisis.

Unfortunately, the procedure and protocol by which CID officers followed to summon Mr. Owalo raises more questions than answers. It contravened section 52 (10) of the constitution which require a person of interest in connection to criminal activity be served with officially written summonses.

While disregarding constitutionally protected rights of Kenyan citizens, a junior CID officer Mr. Cheruiyot made a harassing call to Mr. Owalo. During that scary telephone conversation, officer Cheruiyot ordered Owalo to appear at CID headquarters for questioning. Mr. Owalo tried to explain his tight schedule in vain. The disgruntled junior officer reported the outcome of the telephone conversation to his senior, Mr. Kariiuki. Mr. Kariuki made another harassing call ordering Mr. Owalo to appear at CID â€œwithout fail.â€

That to me doesnâ€™t sound like a professional state agency. It sounds like a repressive agency that mirrors dark ages of former president Daniel Moiâ€™s administration. Moi administration suppressed multi-party democracy and frowned upon dissenting views and opinion. It thrived on dictatorship.

In Mr. Owaloâ€™s case, it appears like CID is not coming from a genuine place to inquire into perceived suspicious criminal activity. Rather, CID-a government agency that was cast negatively by TJRC report is acting on â€œorders from aboveâ€-a tactic that was perfected by Moi. But just like Moi failed, the modern day oppressors will fail.
Iâ€™ am afraid paranoia is slowly but steadily infiltrating in every sphere of Uhuru administration. Whether it is as a result of fear of not being accepted by the public or personal insecurities of our leaders, our government is panicking. Sadly, all paranoid people and governments find solace in dictatorship and repression of dissenting voices.

Thatâ€™s why Iâ€™ am appealing to President Uhuru Kenyatta and his deputy Mr. William Ruto not to turn security agencies into repressive facilities. We endured a lot of crack down under president Moiâ€™s reign. Innocent Kenyans were tortured, imprisoned without trial and held incommunicado. Under no circumstances shall we allow intolerance in Uhuru administration.

Uhuru should borrow a leaf from Kibaki not Moi. Although Kibaki fared badly in curbing corruption and ending tribalism, he scored A+ in protecting freedom of expression and association. Kenyans should feel safe to air their opinion, form groups and associate with individuals and groups without fear of their government. For when government fears the people, there is liberty. When the people fear the government, there is tyranny.