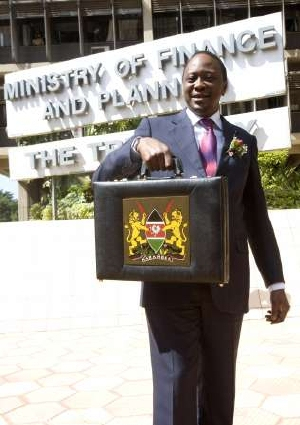 Itâ€™s a running joke on social media â€“ â€œCNN reports that the world is 30 trillion dollars in debt; who does the world owe, Jupiter?!â€ Itâ€™s a meme that mocks the global economic system where entire governments are in debt to private institutions and organizations that they borrowed money from. Kenya is no better than any of these governments; our government has been a consistent borrower from the World Bank and the IMF for most of the last 50 years.

Last year, former President Mwai Kibaki announced during the Labor Day celebrations that Kenya is currently self financing nearly 80% of its domestic budget through its tax revenue. I think that his intention in making this announcement was to dispel the fears at the time that a rapidly souring relationship with western nations may result in our country not having a source for funding our programs and social amenities. Unfortunately it looks like the politicians only heard the part where trillions of shillings are part of our domestic budget. Never mind that the money is actually supposed to be used to run the country, they must have grinned with glee upon realizing just how much money they could get their hands on.

The Jubilee government will go down in Kenyaâ€™s history as the one that took the â€œbig manâ€ syndrome to an entirely new level in Africa. The figures being quoted for splurging on individual luxuries can make your head spin like the girl from â€˜The Exorcistâ€™ – 500 million shillings for the retired presidentâ€™s home, a personal petrol station, 700 million for his office; 500 million for a Chief Justiceâ€™s home, 700 million for a Vice Presidentâ€™s residence, 25 million on a luxury jet trip to Congo Brazzaville, and so on and so on.

Not to be out done, the county governments are also on a luxury spending spree, Kisumu County leading the pack â€“ 72 million on Toyota Prados for county officials, and millions more to be spent refurbishing the county governors home; I understand he is currently staying at a luxury hotel where a night for his suite costs 12,000kshs!

Maybe itâ€™s me. I am just too lowly a citizen to grasp just how needful these things are to the running of the nation. I surely must be so broke to think that an office for 700 million is not only outrageous itâ€™s impossible to find office space that expensive in Nairobi; maybe they are renting an office on the moon. I will not even ask why a retired fellow needs an office in the first place and just forget that to â€œretireâ€ means to stop going to work.

I must be just an ignorant Kenyan, as Prof. Githu Muigai had the temerity to call his employers the other day. Too ignorant to understand that one or two people must indeed spend billions so that 40 million plus people can receive poor or no services from a government that admits it spends 50% of its revenue on paying the salaries of people who really have no record of doing or delivering anything.

If Githu Muigai and his expensive yet useless government cohorts had indeed the level of insight he claims then they would know that Kenya is just a third world nation and not even a middle income nation and certainly not the State of Brunei, which happens to be one of the worldâ€™s richest countries.
I donâ€™t, however, expect these greedy and selfish fellows to have any sort of intelligence. You can tell that no particular reasoning or thinking went into the purchase of luxury vehicles in a County that is notoriously poor. You can tell that sheer idiocy and brazen thievery was at work when the plot to buy a retired president an office for 700 million kshs was hatched. Itâ€™s very obvious that stupid is in charge when 500 million is to be spent on the Chief Justice residence and yet the CJ is also given a housing allowance!

Words cannot express the sort of betrayal Kenyans feel at this â€“ to spend national resources on individuals luxury lifestyle is the height of treachery. It is an unbelievable culture of daring arrogance that has shocked us into silence. Yet we must speak up against those who are corruptly enriching themselves at our expense.

Without wasting a single moment, the Jubilee government set about dealing with the gap between the rich and the poor by making it so exponentially wide the poor cannot even see the other side. We have a brood of selfish, narrow minded and shortsighted people in power and they are too busy turning themselves into mini-Sultans to notice that unless they start using the national revenue for developing the country as is proper, soon this country will go from third world poor to 10th world destitute. Our population is estimated to be at about 70 million by the year 2030; if these idiots donâ€™t stop shopping with our money and start doing what they are supposed to do with it, soon enough even their own so called luxury lifestyles will come to an end.

They may feel superior, but they are only thieves. They may have it good and luxurious but that wonâ€™t last forever. One day in this country, the poor will have nothing left to eat but the rich, and we out number them. That is something that these â€œbig menâ€ keep forgetting, nothing lasts forever.

This piece was first published on 22 June, to read more of Betty Njoroge’s opinion pieces please follow this link and on twitter @bettywaitherero