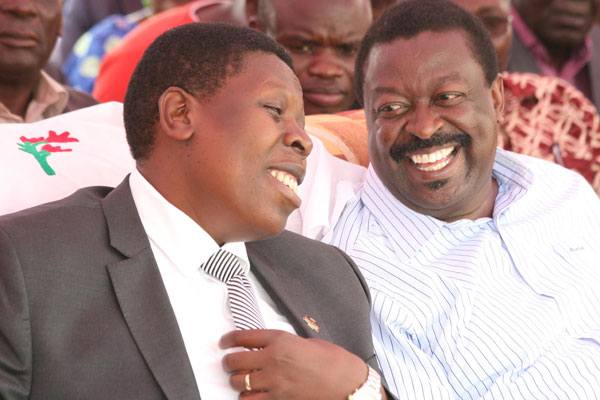 Eugene is doing UKâ€™s bid in Eagle. He joined Eagle so he can entice MM into it in the name of Luhya unity. Eagle is fully financed by Uhuru Kenyatta to divide the Raila 2007 non-TNA bloc. If you can remember the TNA dove was borrowed from Peter Kennethâ€™s KNC. Then Eagle is a bird like the TNAâ€™s bird.Thats your clue right there.

The Jubilee agreements signed with MaDVD were all intended to be fake, to waste MaDVDâ€™s time, to make sure he doesnâ€™t form a coalition with CORD.

Eugene is Uhuru Kenyattaâ€™s kanda ya moko who has volunteered himself to do the dirty assignments, a.k.a the Special Programs like spying for Uhuru in other alliances. He is like a Mark Too- pretends he might join you, but bolts out once his assignment is done.

That explains his prostitution activity in all alliances. Pambazuko, Cord, Eagle, the dude has been in all these alliances, but if you have noticed he hasnâ€™t been doing a jibe at Uhuru, who should have messed him up. Thatâ€™s because they are in this prostitution together.

He is Uhuruâ€™s agent meant to create confusion in all alliances. Ngilu too was part of that prostitution ring, but she became exposed, and has now been pulled out of that assignment, because in her presence meetings went mute, because anything that was discussed in her presence reached her P.I.M.P. called munene was TNA a.k.aÂ  Tigana Na Akora.

The other prong is the Eagle Alliance, which will be running parallel campaigns fully funded by Mt. Kenya and Kiambu mafia intended to divide the non TNA vote region.

The main target here is Western, and the person being lured to lead the Anti-Cord onslaught in the Western Region is Musalia Mudavadi.

If Mudavadi doesnâ€™t play ball and decides to operate outside the Eagle orbit, then Eugene would be the person in the picture.

Peter Kenneth meant well initially, and was fronted by the anti-Uhuru wheeler-dealers within Central Kenya but since the alliances began to be formed, the pro-Uhuru orbit has sent â€œdevilsâ€ to him who seem to have succeeded in compromising his earlier Nobel political motives- which is to rid central Kenya from the yokes of the sense of entitlement wielded by the Kenyattas since Independence.

The Kenyattas are still said to hold onto large land holdings which were meant to be handed to the Mau mau fighters like Dedan Kimathi and Gitu wa Kahengeri.

Uhuru knows his family has disenfranchised the Mau maus, he is silent about it. He hasnâ€™t taken responsibility and instead do what lovers of justice.

He is choosing the path of being a wielder of injustice rather than a shielder of justice. Uhuru ought to show that he can lead the Kenyattas before he can offer himself for leadership for this country.

Tuju, the other â€œflower girlâ€ in the Eagle alliance is obviously an Uhuru stooge only planted in Eagle to give it some semblance of National image but brings Zero votes. Only Peter Kenneth brings some votes in Eagle and only him as the presidential candidate can give Eagle some nationwide support.

MaDVD as eagle candidate would only be a Luhya vote division tool, only intended to divide Cordâ€™s non-Bukusu Luhya support. However, once the Luhyas discover that he has no chance for election they will join the better of the two horses- most likely CORD.

The only County Mudavadi would be competitive is Vihiga, but once Marende hits the ground for CORD, MM would be whitewashed and embarrassed in his own backyard.

That explains why he is cagey about the Majority Leader position. He needs to be MP, but he is not confident enough to pursue that route, given the 2002 experience, where Ruto, who chased him from Jubilee, financed Moses Akarangaâ€™s campaign to deny MaDVD a seat in Parliament. Uhuru also contributed to the anti-MaDVD kitty in 2002 that saw Akaranga defeat Mudavadi in a landslide.

However they are also exploring options of having Eagle merge with Jubilee in the event that such a merger is strategically expedient either in the first or second round if there will be one.

I doubt there would be a second round, because CORD will romp home to victory by mid-day on March 5th, by evening, CORD Leadership will just be planning for the swearing in-ceremony.

Take this to the bank Uhuruâ€™s chances of election are dead on arrival; because CORD comprises the most broad based coalition of the willing, unlike Jubilee which has been a product of manipulation of the state machine and intelligence agents.

In addition the wrangles brought forth by the betrayal of MaDVD within weeks of signing will drag Jubilee to oblivion, donâ€™t take it for granted. He has now taken Uhuruto court, where we are awaiting a precedent setting judge ment which may drag for weeks. Thereâ€™s a crisis in jubilee. Chickens are coming home to roost. 2 conmen are in trouble.

The Merchants of impunity have just added another case into their pile at ICC.Â  ICC is also watching because Bensouda can argue that UHURUTO are devoid of character. By conning MaDVD, it is sufficient evidence that they are power hungry individuals who can go to any length including destroying promising political careers to get their way.

Anybody who has read the Political Parties Act knows that there was a blatant breach of law by Jubilee, and there seems to be commission of malice aforethought, and the clear motive seems to have been driven by a desire to bring down the â€œviableâ€ candidature of MaDVD.

The courts, unless manipulated by â€œthe devilâ€, will definitely find Uhuru and Ruto liable of damages because they intentionally disenfranchised UDF, and denied MaDVD an opportunity to seek other alliances which would have been initiated in good faith- Uhuru and Ruto abused Mudavadiâ€™s rights-.

Thatâ€™s why his case will carry the day, and then depending on what the court rules, Mudavadi will be back in contention for Jubilee candidature, meaning Uhuruâ€™s endorsement by the NDC would have been rendered NULL and VOID. The courts would give them more time to offer MaDVD an opportunity to go throught the nomination process. Thatâ€™s how JUBILEE will begin to disintegrate. Then Uhuru will pay for disregarding State House wheeler-dealers.