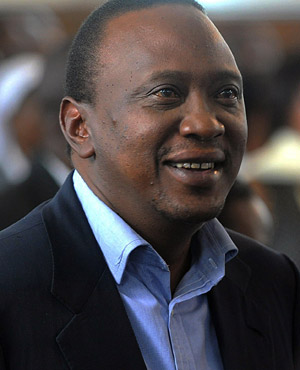 Hold on a moment, imposed president Uhuru Kenyatta carried with him food worthy $80,000 for his trip to Russia and China, at the expense of our poor people!

Wasn’t Uhuru invited or is he gimmicking a one Barack Hussein! Anyway, the last time I was invited, or rather visited – my hosts provided everything!

I am made to understand that Uhuru is very particular about his lamp chops and irio! Which is fine but when you are stealing from the poor- it’s totally despicably immoral!

The work of a good host particularly in diplomatic circles, is to entertain guests -especially dignitaries to a high culinary standards- both with local cuisine and sensitively to the guest’s own taste!

If you are coming to my house and you bring along your food, and maid servant as well as male-servant, I’d ask you to leave those outside otherwise your impoliteness would have no place in my hospitality.

Uhuru was born in state house! Ok then his father couldn’t make an good example to emulate but young Uhuru must have had several opportunities to make observations of the visiting dignitaries’ interactions and ‘chemisty- and to mould himself accordingly!

Sadly Uhuru is turning out to a whole 50+ but a shambolic juvenile leader!

Uhuru and Ruto since grabbing power have behaved like two spoilt little boys! I haven’t got time to list their endless and sometimes utter stupid manoeuvres! And they don’t seem to have a fill of the outpouring of international derision!

Could it be a terribly poor advice and presidential media team? or Uhuru is just naturally immature? I mean this is getting too embarrassing!

You know when Moi was embarrassed, he took it on anyone! Sadly in his time, Ouko took advantage of an opportunity with the then US president, Bush Snr, and outshined Moi- his body would later be found in a bush charred and burnt out, and shot, and burnt again!

With a man accused of heinous crimes against humanity- being shunned off by so many world leaders all of whom are distancing themselves not to be seen with an internationally wanted suspect, the pulling out of several key witnesses ‘without sensible reason’ and the continued intimidation of political opponents and still being frustrated- will eventually lead to Uhuru Kenyatta exploding in a manner unprecedented!

I suppose the amount of food he carried with him- would be to blame!

There’s still a chance for Uhuru to redeem himself and stop the polarising of the nation! Uhuru has the perfect opportunity to turn things around, and throw away his father Johnston Kamau’s and his mentor Daniel Moi’s mantles of dictatorship and apathy!

I’d then be the first to want to shake his hand- as will many of ALL Kenyans!

Even as president, there’s no way anyone could just $80,000 worthy of food beside chefs and other aides in a country where more than 60% of the population would make do with $20 for the whole duration Mr Kenyatta is travelling! $8,000 would have been too much! Nkt! Not too far from the mansion where he lives, little children sleep hungry in the cold and dangerous streets of Nairobi!

I really don’t care if he’s your brother! You have a duty to apprehend him whenever you see him!

If I were president, the first responsibility would be the children, the disabled, the desperately mentally ill- then the poor elderly; the pregnant woman and finally the able bodied man and woman who needs education and something to do!

The leadership we have now stinks to the high heavens!