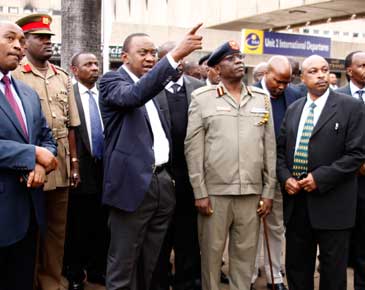 Don’t Forget The Other National Disaster

When the arrivals section of the Jomo Kenyatta International Airport’s Terminal 1 went up in flames, it was interesting to watch the government spring into action. within hours, President Uhuru Kenyatta was at the scene and he stayed there for a few hours more, supposedly to supervise the admittedly crappy response. He and his mandarins were on TV and online providing regular updates. Within days, he had restructured airport security, ordered an investigation into the fire and promised to build a new terminal and fully refurbish the existing three. “We are on top of this. We will find the problem and we will fix it,” seemed to be the message.

It is a complete reversal of his ostrich-like attitude to the elections in March. Despite the many failures then, we have heard nothing about an audit or about reform. Quite the contrary. His deputy has declared that the IEBC did a “fabulous job.” This cavalier approach is all the more surprising given that it was a bungled election that set the country alight 5 years ago.

You would think that a burning airport would be of less consequence than a burning country. But the Kenyatta administration seems to care more for the former than the latter.

The smouldering terminal is the perfect symbol for a smouldering nation. The election fiasco has left many angry and disillusioned with the hollowness of democracy. Autocracy stalks the land. From the rehabilitation of Daniel Arap Moi to the increasingly bellicose and threatening language of the new Principal Secretaries, it is clear that the country is heading down the wrong path.

The airport fire was the result of multiple institutional failures. Over the last few days, the evidence of the country’s lack of effective disaster prevention and response tragedies has been overwhelming and is leading to calls for change. Already, President Kenyatta has declared the overhaul of our national disaster services with the formation of a new agency to spearhead coordination. But what about that most severe of threats to our national fabric, the election?

The institutional failures in March must also be addressed. When the IEBC cannot say who or how many voters it registered; when all the systems meant to ensure the transparency and credibility of the poll fail; when the newly minted Supreme Court refuses to consider evidence on a technicality and offers up a moronic judgement; then we are playing with fire.

Just like there were reports of immigration and Kenya Airports Authority staff shooing people away from a small fire while leaving it to become an inferno, our politicians are shooing us into the safety of our tribal stockades while leaving the country to burn. We must resist this. The charade of “accept and move on” poses real risks down the line. If we do not seek to understand and address the problems of the last election, we will go into our next one even more divided and even more frightened.

Today the air is thick with talk of national disaster preparedness. Every pundit on TV and on the internet is offering his two cents on what failed and what needs fixing. Yet the March elections were every bit a national disaster as was the JKIA fire. And when we speak of improving our capacity to prevent and respond to disasters, we must also speak of how we are responding to the election and what we are doing to prevent catastrophe in 2017.

I, for one, would much rather see President Kenyatta taking the lead in, and giving regular updates on, that effort. And I would much rather the talking heads were putting that at the top of the national agenda. Let’s get on top of this. Let’s find the problem and let us fix it