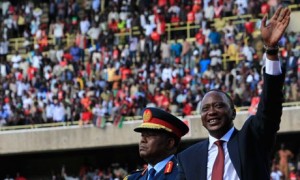 In a country that cannot pay a descent salary for teachers, nurses, doctors, police, middle and lower cadre civil servants, one could expect that the regime should be focused on how to grow the economy, avoid waste and aim to create value for all citizens and other stakeholders e.g enabling environment for job creation and other poverty alleviating mechanisms. Well, the reality will shock you!

For the Uhuru Kenyatta government that came into power via the platform of ICC, IEBC, Supreme Court and a two- tribe alliance, laptop for class 1 kids, jobs creation et el one could expect that after 100 days of nothing to show, the regime should be busy rolling out strategies to regain confidence of the 51 % or so of Kenyans who NEVER voted for them.

Of interest is the state of the economy, rising poverty levels, insecurity, a divided people ravaged by misery that is eroding social fabric of the nation driving sections of the society to adapt crazy lifestyle- like getting cozy with animals

In the mix of legitimacy concerns, labour unions calling for strikes, threats of revolution, rise of bestiality cases in the president’s backyard, the un-ending jigger menance among other challenges, one could expect that the government will be modest in all her spending and more so in events that add no direct economic value to the majority poor.

Kenyans are waking up to a bright Sunday to read newspaper headline that the Uhuru government is proposing to spend 2.5billion to mark 50 years of independence; One thing for sure;- we do not need to spend more than than 500 million to celebrate years of dictatorship, corruption, tribalism, tribal clashes, rigged elections, tyranny of numbers et el. We need not more waste.

Here is the lead story by the Sunday Nation on the proposed 2.5billion celebration.

The government could spend a staggering Sh2.5 billion on celebrations to mark 50 years of Kenyaâ€™s independence if a budget drafted by technocrats is approved by the Cabinet.

Budgetary proposals from the Kenya@50 organising committee reveal lavish spending on activities and projects such as billboards, statues and entertainment as the country marks its golden jubilee in the second week of December this year.

The huge budget includes Sh690 million for events management and logistics, Sh286 million for conference and exhibition during the one week celebration, Sh300 million for publicity and communication, Sh365 million for entertainment and a handsome Sh320 million to go towards identifying Kenyaâ€™s most prominent personalities.

It also includes Sh50 million for erecting a bronze statue of retired President Mwai Kibaki hoisting aloft a copy of the Constitution during its promulgation on August 27, 2010.

In an interview with the Sunday Nation, Interior Coordination and National Government Principal Secretary Mutea Iringo, who chairs the national organising committee, maintained that the Sh2.5 billion budget was yet to be approved by the government but added that the private sector would be brought on board to fund part of it.

â€œThe budget has not been finalised yet, but I expected it Thursday July 25. The plan is that the government should not fund it alone. We want the private sector and other stakeholders to take part.

This is everybodyâ€™s business, and we want all to take part. However, Iâ€™ve instructed the committee that I donâ€™t want to see a budget that is too large,â€ said Mr Iringo.

The figures are likely to infuriate Kenyans coming in the wake of a month-long countrywide teachersâ€™ strike that paralysed learning in public schools and a ballooning public wage bill that is consuming over half of the countryâ€™s budget.

Kenya National Union of Teachers (Knut) chairman Wilson Sossion criticised the huge expenditure coming at a time when the government says it has no money to improve salaries in the public sector.

â€œIt is immoral to say the least. Sh2.5 billion is enough to educate all the needy children in the country. There is nothing to celebrate. Kenya at 50 is more of an ideological reflection of the post-independent Kenya than an extravagant spending by the countryâ€™s elite. The burden of funding the so-called celebrations will in one way or another be passed over to the taxpayer,â€ said Mr Sossion.

Briefing members of the private sector on preparations for the event at a breakfast meeting on Thursday, Mr Iringo declared that the government was determined to ensure that the event eclipsed President Kenyattaâ€™s inauguration ceremony on April 9 this year.

â€œThis event will perhaps even be bigger than the Presidentâ€™s inauguration ceremony and that is why we want to involve as many people as possible and ensure it is a success,â€ Mr Iringo said.

â€œThe government, in appreciation of the significance and magnitude of the 50th anniversary of independence celebrations, constituted the Ministerial 50th Anniversary of Independence Celebrations Preparatory Committee in May 2012,â€ the PS said.

â€œThis committee comprised officers drawn from the then ministry of Provincial Administration and Internal Security. It held several meetings, and recommended the form and content of the celebrations in a report submitted in September 2012,â€ he added.

He stated that the activities were slowed between September last year and April this year because of the political campaigns leading to the March General Election.

Minutes of the committee meeting held on July 9 this year indicate that the budget for former president Kibakiâ€™s bronze statue was raised from Sh15 million to Sh50 million.

â€œIt was agreed by the members that the Sh15 million budget for a special monumental bronze statue of H.E. Mwai Kibaki raising aloft a copy of the Constitution should be enhanced to Sh50 million.

Members felt that this was necessary so as to have a monument that was of the right scale,â€ the minutes read.

The meeting further allocated Sh20 million for the acquisition of 20 billboard size portraits of the countryâ€™s founding father Mzee Jomo Kenyatta, former presidents Daniel arap Moi and Kibaki and current President Uhuru Kenyatta. This followed a proposal by the presidential master of ceremonies and the committee secretary, Mr Sammy Lui.

â€œIt was proposed that the billboards should be placed strategically at the entry points of the city. It was also felt that there was a need to have similar billboards in big towns such as Kisumu and Mombasa,â€ the minutes read.

A Sh338 million budget for security, protocol and hospitality will go towards catering for at least 40 heads of state and government expected to attend the occasion. This will include five-star hotel accommodation, transport, meals and security for the two days they are expected to spend in the country.

The budget will also cater for invited heads of international organisations such as the African Union, Comesa, East African Community, Igad and others.

The committee had suggested a figure of Sh11.5 million for sprucing up Moi International Sports Centre Kasarani which will host the main celebrations,but a section of members proposed an enhanced figure during a meeting last Tuesday.

A further Sh170 million is proposed for the hosting of conferences and exhibitions in the week leading to December 12. This would cover hiring meeting rooms at the Kenyatta International Conference Centre (KICC), VIP catering, entertainment and security at the events.

A letter from the Director-General of the National Museums of Kenya proposes Sh4.2 million for cleaning up Uhuru Gardens on Langata Road that will host part of the events, including unveiling of the Mashujaa Monument.

The expenditure also includes Sh120 million ttowards hosting an international investments conference in October as part of the celebrations, a national food festival (Sh15 million), Sh3.3 million for a cultural week between October 10-19 and another Sh3.4 million for a music and cultural festival at the Kenya Cultural Centre in November.

The Sh320 million for identification of Kenyaâ€™s most influential personalities will go towards their dressing, accommodation and transport to and from Nairobi. â€œOnce identified, these influential persons will be given a token of appreciation,â€ Mr Lui told the committee during its meeting on July 9.

â€œThose deceased will be represented by their next-of-kin. He (Lui) also pointed out to the meeting that the funds budgeted for were for dress, accommodation and transport. Although some members felt that in the case of the deceased influential persons, identification of the next-of-kin may be a challenge, this component was adopted as it is,â€ the minutes read.

Mr Iringo is said to have declined to approve the budget last Tuesday without first getting approval from the Cabinet.

Addressing members of the private sector on Thursday, Mr Iringo said the climax of the celebrations will be the simultaneous hoisting of the national flag at Uhuru Gardens and on top of Mt Kenya at midnight on December 12.

He challenged the private sector to consider sponsoring some of the events including the funding of the refurbishment of monuments at Uhuru Gardens, the provision of advertising space for Kenya @ 50 activities in the media and putting up of Kenya @ 50 county monumental development projects in remembrance of the 50th Anniversary to be launched by President Kenyatta as part of the celebrations.

He also asked the private sector to consider funding the illumination of landmark buildings in various towns that were built between 1900 and1960 for the one-month period between November 15 and December 15.

â€œWe ask you to fund the production of Kenya @ 50 Reflective Journey magazine, that will seek to highlight key achievements through pictorial and print briefs depicting Kenyaâ€™s corporate revolutionary experiences over the last 50 years,â€ he said.

The private sector can sponsor the production of the magazine through posting short profiles of their own achievements,â€ he said.