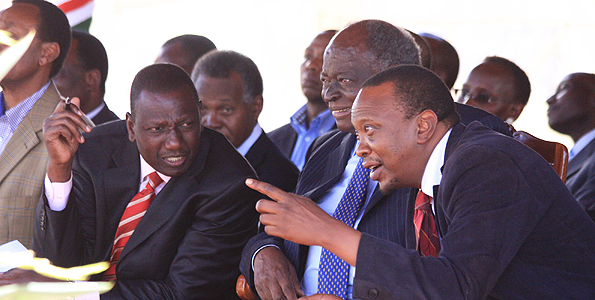 The first steps by the Jubilee Coalition in their quest to assume power have confirmed our worst fears, that Uhuru Kenyatta and William Ruto are two politicians who lack nationalism and are out to build a government of two communities.

When Parliament (National Assembly and Senate) first sat on Thursday, they lobbied to ensure both speakers and deputy speakers are from Rift Valley (RutoÃ¢Â€Â™s) and the Mt Kenya (UhuruÃ¢Â€Â™s) regions.

Better candidates from other parts of the country were cut out.

So they took a crony of Uhuru Kenyatta, Justin Muturi for National Assembly Speaker with RutoÃ¢Â€Â™s ally, Joyce Laboso as his deputy. At the Senate, Ruto crony, Ekwe Ethuro was elected speaker and UhuruÃ¢Â€Â™s close ally Kembi Gitura given the deputy speakerÃ¢Â€Â™s positions.

These acts have betrayed the two menÃ¢Â€Â™s intentions: To appoint only their cronies from their communities to serve in Government. Kenyans are shocked that even their supporters from other communities were sidelined in the crucial decisions to pick the speakers.

In what is a shocking show of numerical arrogance, the great support and sacrifices the two got from areas like Coast (Ali Mwakwere, Najib Balala, and Danson Mungatana), Lower Eastern (Charity Ngilu and Kiema Kilonzo), Nyanza (Sam Ongeri and Onyango Oloo), Maasailand (Francis Kaparo, Katoo ole Metito, Julius ole Sunkuli, and Gideon Konchellah) and North Eastern (Adan Duale, Mohammed Yussuf Hajji, Abdi Kadir Mohammed and Ali Korane), the two Jubilee principals never thought of allowing these communities to produce the four speakers as a sign of accommodation. What a slap in their faces.

Now Kenyans can see what was being feared about the two leaders. Pride, arrogance, and tribalism. Even their predecessors: Jomo Kenyatta, Daniel Moi and Mwai Kibaki did better. Despite having entertained some tribalism, those statement at least did everything to distribute key national positions across the countryÃ¢Â€Â™s 42 communities and made many feel appreciated and accommodated.

The Supreme Court has now given them the green light to form the government. What can we expect?

Kenyans can now clearly see the direction these two are taking us. It is impossible to imagine how the two decided to sponsor Justin Muturi for speaker instead of the more astute and proven nationalist like Kenneth Marende or the veteran Francis ole Kaparo. Reason? The two donÃ¢Â€Â™t belong to the two communities.

The remaining communities should take note of these actions and most likely similar ones during appointment of Cabinet secretaries (ministers), Principal Secretaries and parastatal bosses to know that they are on their own.

They should prepare for their future without any hopes in these gentlemenÃ¢Â€Â™s government.