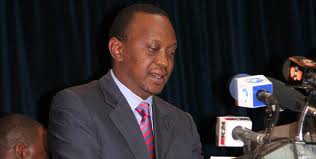 Here below are the exclusive excerpts of Uhuru Kenyatta’s concession speech, with his party loosing momentum in Rift Valley,Â  the Jubilee candidate has only one region left as the last bastion of his presidential ran.

He run a great campaign that was only ruined by tactical mistakes. With the ICC case collapsing, the youthful Uhuru will easily win the 2018 general election. It is normal for candidates to prepare two sets of speech; victory and concession speech. we will shortly release Raila Odinga victory speech immediately we receive it.

I stand before you today, filled with humility; to thank you for your support you gave me and my running William Ruto during the long campaign period and the elections.

It has been a tough journey, but with your support, we managed to overcome barriers. As you know, the people have spoken, and they have clearly said that my brother Raila Amolo Odinga is the 4th President of this great republic of Kenya!!

(Pause for cheers and acknowledgement)

I take this early opportunity to congratulate my brother Raila on his election. I have been on phone with the president elect to express my support and that of my coalition. I urge all Jubilee supporters to work with the new President in moving our great country forward.

Elections should not necessarily divide us. Elections are contests that come and go, but Kenya will always remain. I congratulate Kenyans for a peaceful election that has demonstrated to the world that now Kenya has come of age.

To my coalition and TNA members, I promise to be steadfast in building a strong party, strengthen its institutions to be a model party in Africa that will be an envy of the many

I urge Kenyans of all walks of life to remember that our unity is our strength, now and in the future. Once again, I congratulate the president elect Raila Odinga and wish him well on his new responsibility as president of our republic.