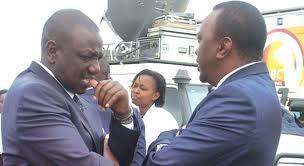 Uhuru and Ruto at a past event;if you tell the West off voters will believe us! Images courtesy Google.

Distinguished Kenyans, I plead with you as a fellow citizen; do not listen to what Uhuru Kenyatta and William Ruto tell you in campaigns for they are not sincere with you and their own selves. They know you are vulnerable and can easily be misled to believe campaign lies oozing out of a politician’s mouth without really seeking to establish underlying truths. The two have not only told Kenyans half truths but also utter lies. They are in a joint battle for their own lives.

The Jubilee presidential candidate and running mate have some of the most heinous criminal cases in human society. Like President Omar el Bashir of Sudan, they believe grabbing power and sitting at the helm of the nation will insulate them from prosecutions at the International Criminals Court at The Hague.

I would wish I began this article on a sweetly soothing note, especially, highlighting the son of Mama Nginaâ€™s family fortunes or as one of the most urbane man educated in a United States of Americaâ€™s elite college. I would have wished I expounded on his cosmic business investments and interests in the sparse spheres. I would have wished to endorse him as one of the true owners of Kenya, with land parcels enough to settle people of entire coastal Kenya. He is such a special breed of mankind.

The reason why I spare my praise from the son of Mzee Jomo Kenyatta is that he is damn deafened and blinded by egoism and conceit. He also relies on self-fear as he seeks to buy the nationâ€™s ship in his escape from guilt of crimes and atrocities he committed against Kenyans in 2008 when he led gangs into causing bedlams that left several innocent people dead, limbless, homeless and traumatized. He wants to run away in a nationalistic guise, riding on the people in an election; masquerading as he buys them with money. After hooking a fate-partner in Ruto for Kikuyu â€“ Kalenjin numerical votes, Uhuru seems to be succeeding in creating tribal hegemony and fears during this transition year of the nation. That should not be allowed to succeed!

We can forgive Uhuru and Ruto for every crime they have committed against us, especially, if they ask us to do so. They are our sons; the sons of this sovereign land. We wipe one anotherâ€™s tears when a calamity befalls us. But when they play chase against us and lie to us that our problem is â€œthe West coming to re-colonize us through some leadersâ€ then we have a reason to hate them. They are not sincere. They have fallen off with the West because of their criminal records. It is world knowledge that the West do not condone such kinds of characters.

In fact, the truth of the matter reads longer than Uhuru and Rutoâ€™s page on the West. No credible country wants to do business with the duo; not even the East that they keep selling to us in their propaganda. No one would want to deal with criminals indicted by the ICC. That puts our position at stake should the two form the government this year. Kenyaâ€™s international image will change like flipping a switch and we will lose our diplomatic image. No, we can avoid it! We cannot not afford the diplomatic death.

Being economic and security anchor in East Africa, Kenya is a strategic state. This is always fragile in transition because of schemes like those that took Uhuru and Ruto to the ICC.

Since the countryâ€™s economy, diplomacy and philosophy have umbilical cords tied to the West, the â€˜wazunguâ€™, as the duo call them have a mutual obligation to listen to people of the nation and guide where necessary. That does not limit sovereignty of the nation. That does not sell out independence of the people. Â If truth is told; we are entirely dependent.

Before the diplomatic missions, United Nations, World Bank, International Monetary Funds, foreign aids, etc, are withdrawn from the nation, we would not like to see tea, coffee, flowers, sisal, handcrafts, minerals and other valuable exports banned. We do not want to see investors, foreign banks and international traders flee, travels for diplomatic conferences, tours, studies, etc, stopped or Kenyans in the diasporas prevented from sending remittances. These and others underline the fact that Kenyaâ€™s economy is externally oriented with the West as the capital movers. This is what Uhuru and Ruto should be telling the nation in campaigns if they are sincere people.

And before our shilling lurch under the weight of the entire world like the Zimbabwean Dollar, ZWD, which earlier changed our currency at ration 1:12 before somersaulting to ration 370:1 after sanctions, economies of our neighbours which include Tanzania and Uganda will have sky rocked leaving us for beggar-kings who have fallen from grace to grass. That is after investors and traders shift attentions as sanctions bug bite the nation. Uhuru and Ruto should tell the nation what they plan to do in such a case other than spray springs of vitriol in the transition campaigns as ones transacting the nation for worse chaos than those of Sudan.

It puzzles Kenyans, therefore, that Uhuru and Ruto clearly understand what their schemes stand to throw Kenya into but they â€œbetter whisper it in boardrooms than say it in publicâ€. That was evident late last year when they met Musalia Mudavadi in his house and beseeched him to lead their campaigns â€œbecause the developed nations will slap sanctions on usâ€. Though they reneged on the same blaming it on the devil and dark forces, it became evident that â€˜they understand the impending predicaments but they dare not tell the public in campaignsâ€™. Instead, they are hell-bent on castigation truth as a cover up to their evil facades.

If truth is told, Uhuruto politics is driven by the devil and dark forces. Otherwise, how would we explain their aims after it is revealed to the nation that they know their bid will make life unbearable to Kenyans?! How will they explain their insensitivity at enhancement of unemployment, corruption and criminology due to ensuing struggle for survival in the sea of scarcity?

The leaders are struggling to form a nation in a gurgle of uninformed realities. In essence, the pelt lies upon the citizens of our lovely nation. We should block our ears to them. They are not sincere at all.