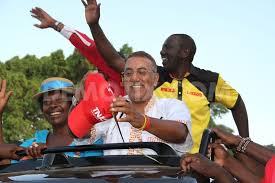 [wpsocialite]
Reports appearing in the mainstream media that Hon Charity Ngilu, Najib Balala and Chirau Ali Mwakwere, Prof Sam Ongeri may miss out in the cabinet slots seem to reverberate well with the public, considering how the media has packaged the position of secretaries as â€˜technocraticâ€™, professional and requires very â€˜highâ€™ integrity standards.

However, a keen observer of the political developments cannot miss too see the hypocrisy in the move. The strategy to use NSIS and Ethics and Anti-Corruption Commission (EACC) clearance as an excuse to bar the four from appointment will only serve to remind Ngilu & Co and the rest of Kenyans of the use and dump tacticsÂ  perfected by rtd president Moi during his reign.

The Supreme Courtâ€™s verdict on the election petition that validated the victory of Hon Kenyatta is testimony that no institution is bigger than Uhuru and his handlers and hence certification that Uhuru is simply not going to reward Ngilu & Co not because they didn’t pass the integrity test BUT because he wants it so! The NSIS and EACC are only being used by the presidentâ€™s handlers as a shield; otherwise, if they delivered the presidency, getting Ngilu and Co to the cabinet will only take a less than one minute telephone conversation!

The four politicians to be dumped stuck with candidate Uhuru and Ruto even when it was clear doing so was signing a political obituary. It was Najib Balala who first â€˜predictedâ€™ the future of Kenyan leadership as revolving around the â€˜high-tableâ€™ where Uhuru and Ruto sat side by side. Even when Kwale County was openly showing signs of hostility towards the Jubilee alliance, Mwakwere stood out for Ruto, later â€˜allowingâ€™ Uhuru to navigate the murky land question in the coastal region. In Kisii Ongeri delivered the much needed 30% of votes from the two counties of Gusiiland against all odds!

Ngilu made a passionate appeal for Uhuru, even sacrificing her presidential ambitions and her party to join Jubilee. Had she not crossed over from CORD, she would be in the senate today, because, most kambas credit Ngilu for doing so much for Ukambani more than, surprisingly, CORDâ€™s David Musila her competitor in the Kitui senate race.

Ngilu is a senior Kenyan politician with a proven track record. Politicians like Charity are more precious for the president than hawk-eyed bureaucrats and status quoists like Kimemia and company because they not only bring merit to the table but also a unique political experience nurtured over decades in elective politics. They understand real politick.

To call her a political reject, like Charles Keter was quoted saying, simply because she lost her seat campaigning for the president in a region which, after the frustrations Kalonzo Musyoka went through, in the hands of the very same president and his deputy, then presidential candidates with the heavy baggage of the ICC, is to perpetuate the enduring culture of use and dump which is Kibakiâ€™s legacy.

To use the NSIS and the EACC to project these individuals as having integrity issues is to hoodwink the public. In fact, the president and deputy have global â€˜integrityâ€™ issues more than the three. The NSIS raised no objections when these leaders vied in the last elections. The EACC gave these leaders a clean bill of health.

Political reciprocity is important in a multi-ethnic democracy such as ours. Merit in politics is a very controversial topic. For example, which yardstick is the president using to bar these three from leadership? Rejection at the ballot? Poor service delivery?

Let me be clear, Iâ€™m not holding brief for Ngilu, Balala and Mwakwere, Prof Ongeri. These are politicians who never got my vote. I come from a region which views the three of them, especially Balala and Ngilu, as traitors who turned their backs on Raila Odinga when he needed them most, yet, my refusal to accept the poisoned chalice we are being treated to, that the three are not worthy of being in the cabinet of Uhuru and Ruto, stems from the fact that we in Kenya are trying to legalize politics.

We have so many agencies and commissions telling politicians what to do, when to do what and with whom to do what so much so that the art of politics is losing its meaning.
Politics is no longer dirty in Kenya. Politics is being sanitized at a speed this country, and indeed no country under the sun, has ever endured. Our political arena is an expanded supreme court where decisions are immutable. This is not what popular democracy is. This is what popular idiocy is!

Politics is how peoplesâ€™ expectations are handled. If the new president bungles these expectations by using laws and agencies which want to manufacture â€˜anglesâ€™ for Uhuruâ€™s cabinet, then we are staring at a future where all political deals will have to be deposited in courts to give them life.
The president and his deputy must go beyond their high octane rhetoric of uniting the country in funerals and churches and be seen to be doing so.