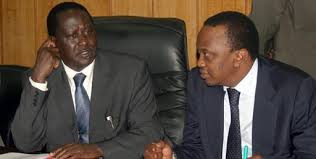 A situation where a suspect of man-slaughter is ordering a pan Africanist to shut up on commenting on matters of national interest is not only ridiculous but also shameful.

Uhuruto duo of criminals are in a dicey situation of balancing between leading the country and attending to their criminal charges at the Hague. Let nobody fool you. These two “rats” are conered. They foolishly thought that stealing the presidency would insulate them from attending court sessions in a foreign land.

Having failed to win international support, and, being aware of the dwindling and fragile local support, the son of Jomo and the self proclaimed “hustler” – this is just a theory – have resorted to orthodox tricks of winning homegrown support by exploiting the ignorance of desperate squatters through issuance of land titles.

Uhuru being a beneficiary of Jomo’s massive land grabbeing followed closely by his warlord friend and deputy, William Ruto, it is a mockery of our conscience for him to pretend to offer a solution of any nature before returning the large tracks of land currently in his possession.

To add salt to injury, it is an insult – for lack of a better term, for this ICC client to command Raila Odinga to shut up. Uhuru has neither moral nor legal authority to give such a directive. Raila is enjoying the freedom he fought for in decades while uhuru
was still eating bread,butter and partying. It is disastrous for a “president” – stolen victory of course – to free his loose tongue. Such unhinged tongue are perilous when set
free.

The Jubilee gang and its directionless leadership should know for a fact that any
underhand method they device to curtail the freedom of any Kenyan citizens won’t be mollycoddled.
In addition, it were appropriate if Uhuru would have spent all these energy and time he is spending on attacking Raila in his genocidal case. Stop blackmailing Raila man,
you should save your skin at the Hague – which i doubt!