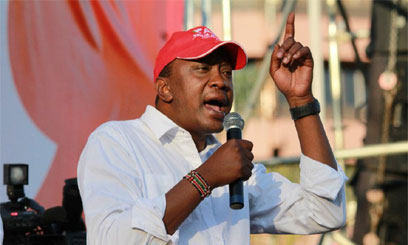 Going by Uhuru’s continued display of intellectual deficiency during the Al Jazeera interview and in other fora, its apparent that Kenyans deserve better, may be the Next President should hold at least a Masters Degree.

In the Al Jazeera interview, Uhuru was determined in parroting his agenda, he was not keen on the programme host’s question; he avoided most of them; just like he did in the BBC hard talk back in 2008 and in many other interviews. Intellectuals listen as the interviewer builds her/his case, setting the scene and then respond with relevant answers. You only need to compare Uhuru and his very smart running mate William Ruto then you will see a clear difference.

Uhuru, despite wealth and affluence did not have the audacity to seek further education, after his undergraduate, he packed his bags and came home to mama to enjoy Jomoâ€™s ill gotten wealth.

Joe Nyaga, Charles Nyachae, Raila Odinga, Dr Oburu et el are sons of prominent Kenyans who put more hours into their studies. Uhuru set a bad example to his Gatundu peers and subsequent generations; could that explain the myriad youth problems in Gatundu? That I donâ€™t know.

Just emerging from Kibaki and Raila Leadership who both are great intellectuals with Masters Degrees in Economics and Engineering degrees respectively, it would be retrogressive for Kenyans to start having an intellectually deficient leader.

Average Kenyans are burning midnight oil to acquire that elusive paper- a masters degree; many cannot understand or even believe that Uhuru after his undergraduate studies in the 80â€™s never touched a book again, not even a single seminar to refresh his memory. Uhuru could have easily done even an online study.

The Kenyan middle class toils, taking loans and using matatu from work to USIU, Strathmore, UoN, Egerton and so on, it would be unfair for them to work so hard to improve quality of managerial decisions, only for them to commit their life and that of their children to a person with inferior managerial competence.

It is public knowledge that Muhoho Kenyatta the young sibling of Uhuru is the defacto manager of the Kenyatta business empire, Uhuru is a joy rider whose only credit is being a first born ofÂ  Mzee Jomo.

Uhuruâ€™s intellectual ability is important, it defines who he is, and it gives us an insight into the nature of person he is. Here is why.

ONE, his lack of love for the educated and intellect is explains why he supports Waititu and Sonko for Governor and Senate respectively. Could it be that Uhuru is only comfortable in company of people whose thinking, intellect and reasoning doesnâ€™t threaten him? People he can dominate and monopolize, praise singers so to speak?

May be Uhuru feels intimidated by intellectual giants; could that explain why he mistreated Kiraitu, and its no secret Uhuru doesnâ€™t like Peter Kenneth, he is rumoured to have influenced Kibaki not to appoint Peter Kenneth to the Cabinet as a Minister. It doesn’t surprise at all that intellectual heavyweights like Jimnah Mbaru were rigged out in the TNA primary.

TWO, Uhuruâ€™s flagship Brookside Dairies wonâ€™t allow its employees time off work because you have an exam or class. They wonâ€™t even pay you an advance for fees, they would politely tell you to go to a bank and take a loan.

That is the attitude of academic jealousy and insecurity that he would carry on into the Presidency. He would certainly kill education in Kenya may be due to insecurity- fear that if the youth get educated, they would upstage and outshine him.

For a rich dude like Uhuru, only laziness would prevent him from acquiring a top-notch MBA or Law degree. Donâ€™t tell me lack of time, coz he has time to drink and make merry with his associates.

Letâ€™s face it, Uhuru, doesnâ€™t have sufficient education to effectively articulate Kenyan positions in the UN or G8. A leader cannot rely on pre written speeches only, what of the Q&A with international media?

That leaves us with one leader in the top three contenders who Kibaki has consistently begged to represent Kenya at the World Economic Forum, Raila Amolo Odinga; the German educated master of engineering graduate.

A man who has penned a thesis or dissertation if you like, and whose thinking and reasoning has been recognized thus earning him PhDs around the world.

A man that the world and investors are waiting for to take the reins, the only man in the race whose eloquence wonâ€™t embarrass at World Forums. Dr. Raila Amolo Odinga.