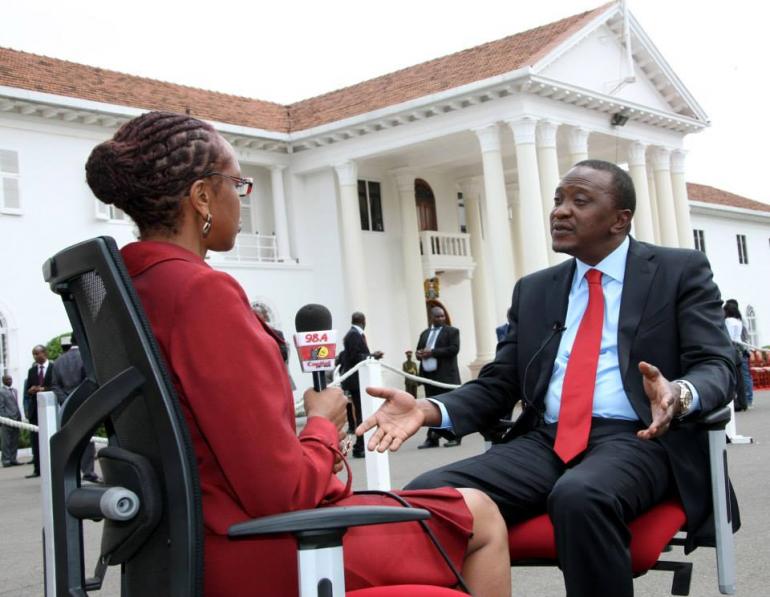 Photo: President Kenyatta in an interview during the Media breakfast at statehouse Nairobi.

Multiple and many sources close to associates of the newly inaugurated presidential strategic communications team tell of a government going the uncharted pathways to engineer public opinion in a scale never experienced before. As teachers strike stumbles under the heavy weight of government intimidation, it is now emerging (allegedly) that President Uhuru Kenyatta’s coalition, only 100 days in power, has employed 100 journalists to ‘cover’ the presidency and coalition affairs, this is in addition to the thousands of social media volunteerÂ  bloggers.

“Truth be told, had it not been for ‘our friends in the media’, this government could by now be a laughing stalk, but the pressure in the newsroom is huge so we had to hire ours”, a source familiar with the goings on intimated. The press team, whose public face was shown recently, is said to be a big network of behind-the-scenes individuals, reeking in thousands of shillings monthly, with access to almost every government institution in the country.

In the mainstream Kenyan media, powerful individuals close to government are alleged to be clandestinely paying off many journalists and reporters to either ‘spin’ for them (give good news coverage), or report more negatives on the opposition side, this is not new , it started way back during the campaigns.

“After the presidential debate when our candidate was embarrassed by a stubborn journalist, we decided we are never going to have a hostile journalist interviewing the president; we had to act, it is politics, and one got to do all that is necessary otherwise we will have embarrassing sideshows ” revealed a source close to TNA’s core media team

The same source says the worst nightmare of President Kenyatta are the ICC cases, set to begin late this year.

“The prosecution will be showing very disturbing images of the 2007 post-poll violence which we want to counter with all the best minds in media propaganda and what you have seen is just the beginning”.

Recently, Jackal News media reported on what can be termed as subversive activities (whatever this means) by Eliud Owalo an aide to former Prime Minister Raila ; hardly a day passed before Owalo was summoned by the CID, to make statements. This development prompted many to question the source of JackalNews story and if it was the intention of government to communicate sensitive matters informally.

“Is this part of the strategy by the government to intimidate and silence dissent, is Owalo’s case a warning to others? are there more others to be summoned on flimsy grounds? for how long? is it sustainable in modern day democracy?

Another issue being discussed broadly within the president’s kitchen cabinet is how to handle the restive Deputy President, William Ruto, and the imminent fallout of the two which, interestingly, many believe itÂ  will happen.

“The question in our minds is when? We knew all along this would not last. Ruto probably is here because he realizes he is very unpopular outside the Kalenjin. He is also using his leverage to get to understand how much information the government gave the ICC which led to his indictment” a source noted.

“It was Muthaura’s men who sold Ruto; and because Muthaura shared a lot of briefs with his lawyer Karim Khan and was acquitted, you saw Ruto taking over the same same lawyer,” .

As Laswell would say: This is the golden era of media rent-seeking.