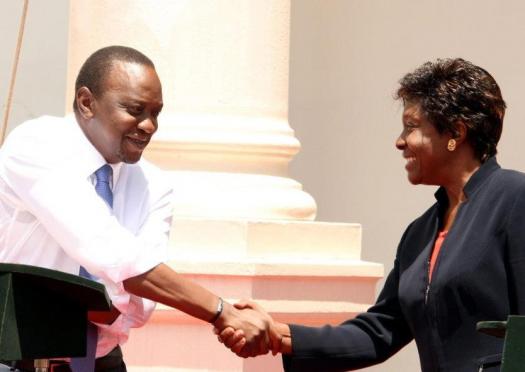 In the class of communication ethics, one of the few ways of sensitively handling truth is releasing information or news in piece-meal.

This is a concept that allows a journalist to keep their audience with up to date news without sacrificing truth at the altar of sensitivity or right to privacy.

In the recent past it was successfully employed during the infamous Boeng crash that left hundreds dead in a forest in Cameroon. We were first informed that a Kenyan airplane has lost signals in Cameroon air territory.

Then news followed that the airplane has actually crashed and they were looking for survivors. After sometime, it was finally all over the media that there were no survivors.

This noble concept has found its application in a rare and unfamiliar territory.

The President and his Deputy must have internalized the concept of releasing information in piece-meal to monitor public pressure and reactions towards their choices of cabinet secretaries.

However, the concept is likely to have been used in a jurisprudence that is ill suited for its benefits more so to the wider public.

The public eagerness and curiosity over the men and women who will manage various government ministries cannot entertain piecemeal approach to their selection for the following reasons.

The constitution requires the president to take into considerations gender and regional balance in naming various state officers. He must ensure that at least a third of the composition of such organs like the cabinet comes from either gender.

How will this requirement be effected by parliament if the UHURUTO continue with this piecemeal process?

Suppose the Parliamentary committee on appointments approves the first four nominees as it is going to then later on while on its last two or three realize there is no gender or regional balance in the appointment what will be the next course of action?

Secondly, this exercise is even unfair to the potential appointees especially those who will come later in case the constitutional threshold of gender and regional balance is not met. It means they will have to be sacrificed upon rejection by the parliamentary committee.

Thirdly, even though the president and his deputy are not under any constitutional obligation to give us the full list of the appointers, conventional practices world over has dictated that has the way.

You might be tempted to argue that this is a new dawn with a break from the past, but remember ceding new grounds in most cases do not come with a prescription of handling any eventuality like the occurrence of the least expected.

The public must have in its possession various remedies of handling the unexpected if their hopes and wishes are not met at the end of this crucial exercise.

But has things stand now, they do not have and even a bigger chunk of the population is not thinking towards that.
Fourth, the President and his Deputy are only playing to the public gallery by displaying glimpses of enthusiastic gestures but are yet to concretize their thought process on the final outlook of the cabinet.

They are really trying to please the public while courting danger that looms over constitutional threshold of such exercise.

Lastly, this is in some quarters viewed as a strategy to sneak back the usual suspects to cabinet through the back door after playing to the public tunes. Praises and accolades will have been sent by the end of this exercise making it hard to withdraw the same when the final names are pronounced.

Remember timing is everything in politics. In his 48 Laws of Power, Green Robert says in Rule No. 35: Timing is an art that must be mustard. Never seem to be in a hurry. Hurrying betrays a lack of control over yourself and a move over time. Always seem patient, as if you know that everything will come to you eventually.

So even this is simply politics although in a new brand