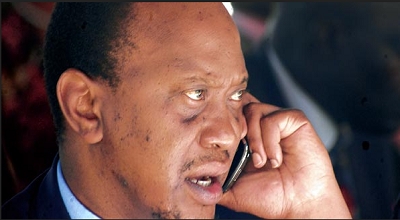 Top officials in Uhuru’s government are said to be considering using the ‘international goodwill’ of the people’s president, former PM Raila Odinga to secure release of Kenyan government officials still being detained by the controversial Nigerian businessman Anthony Chinedu.

A highly placed source conversant with issue claims the talks had collapsed between Nairobi and Abuja as Chinedu is said to come from an untouchable political dynasty akin to that of president Kenyatta Himself! The source says the government had made ‘preliminary contact’ with Mr Odinga through an aide whom we cannot name due to the sensitivity of the issue.

Chinedu is also said to have given the authorities in Abuja valid documents of businesses he was allegedly running with senior Kenyan government officials, some whom he accuses to be the force behind his deportation.

However, the fear in the government is that engaging Odinga would give Chinedu an opportunity he does not deserve to spill the beans which has the potential of ‘putting our people’ in shame.

Matters in the security apparatus of the country has also been made worse with the appointment of Ole Lenku as Interior cabinet secretary and the much publicized supremacy wars between police Inspector General David Kimaiyo and Johnstone Kavulundi,the Chairman of Police Oversight Authority.

Those in the government comfortable with roping Mr Odinga in says his international stature allows him to ‘intervene’ in such cases.

“That’s what statesmen do. . .solve diplomatic crises with the potential to strain relations between countries,” said the source on condition of anonymity.

In a swift rejoinder, however, Odinga’s supporters demanded the government first acknowledges that it was Odinga who secured the British government to compensate and also ‘apologize’ to the MAU MAU war veterans, many of them elderly poor Kikuyu men.

“It is wishful thinking that any legal mind in Africa could win that case, so we were a bit shocked when we saw busybodies claiming they led to that outcome,” a former cabinet minister now senator said. He added it was a shame even the ‘old men’ did not show gratitude.

“He did a lot to them, but the word ‘thank you’ is not in their language,” said another who did not wish to be mentioned citing his close links with the CORD leader.

Both Foreign Affairs cabinet Secretary and her counterpart in the Interior are said to have been ‘clueless‘ about the whole operation thus are embarrassed to give government position which they secretly claim may not be the ‘official’ government position.