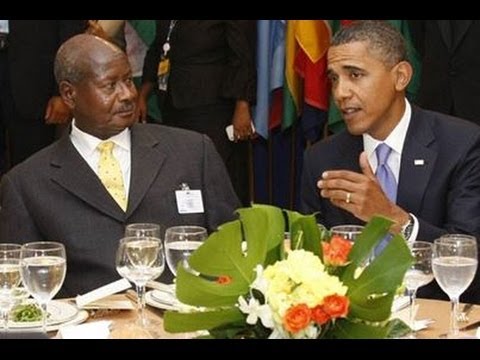 For a good chunk of the past score years, Yoweri K. Museveni has been the blue eyed boy of the West in Africa. In their media he was represented as the man Europe and America could do business with without blushes; the man who took the path less trodden by fellow African leaders-the path of progress. Things have changed though.
He who once castigated fellow African leaders for their penchant of relinquishing power only by the bullet and not the ballot now considers himself â€˜too legit to quitâ€™. A late comer to Pan-Africanism he has nonetheless distinguished himself as the most vocal, even comical, anti-Western leader on the continent.

A recent addition to his impressive â€˜anti-imperialismâ€™ C.V has been the signing of the Anti-homosexuality law which he hopes will put to end â€˜social imperialismâ€™. That one act has almost overnight transformed Uganda, once called by Winston Churchill as the Pearl of Africa, into the Great North Star for all homophobes the world over. Now men and women with a deep loathing of homosexuality and who come from â€˜shyâ€™ countries like Kenya look upon Uganda as that â€˜shining city upon a hillâ€™ to be emulated. This is without a doubt Museveniâ€™s moment in the sun, all eyes are on him.

Yet Museveniâ€™s signature anti-Western bill is replete with ironies. Standing head and shoulder above the others is the shocking revelation that the billâ€™s brain child was actually not a Ugandan but American Christian fundamentalists who have been shunned in their own country for their extreme conservative views. They for example condone â€˜legitimate rapeâ€™; believe that the earth is the centre of the universe and that blacks are descendants of Ham destined to wipe the boots of whites.

Two generations earlier they are the same people who flooded the ranks of the Ku Klux Klan with one objective- to wipe away from America the â€˜nigger scumâ€™. Now these people all of a sudden know what is good for the â€˜nigger scumâ€™. In America they used to call blacks a â€˜disgraceâ€™ to their nation and Africans as inferior and having a â€˜primitiveâ€™ culture. Now out of the blues they have transformed themselves into plumed knights in shining armor ready to defend our â€˜primitiveâ€™ culture.

In their country they have been shoved away to the fringes but they refuse to surrender. Rather than accept that their views are out of tune with the times they have retreated to Africa to open another battleground. In Uganda where many are sympathetic to their brand of conservatism they have achieved remarkable respect and acceptance by the religious and political elite.

By appending his signature to that profane bill Museveni was therefore inadvertently turning his country into an ideological battleground of Western groups. That a full blooded â€˜Pan Africanistâ€™ should be giving his nation a full dosage prescribed by white racists to a â€˜problemâ€™ thatâ€™s not even mature in his country is ironic beyond description.
I strongly believe that Museveni does not think that peopleâ€™s sexual preferences can be legislated away. There are limits to what laws can do in a society. Some time back Americans attempted sobering up their nation through legislations that prohibited the sale and consumption of alcohol. This proved to be an exercise in futility and was soon abandoned as people drunk themselves wet like never before. Museveni knows all these. He knows that legislations cannot fundamentally alter somebodyâ€™s lifestyle.
Yet he goes on with the signing. Why? There might be political considerations to that. It should be remembered that Museveni is first and foremost a politician. For him holding on to power overrides every other consideration when making decisions.

Psychologically speaking, anti-homosexuality is to a common Ugandan what slavery in the pre-Civil War American South was to a poor white. Itâ€™s recorded that more than half of the white population in the American South of those days were poor beyond description. Some were in fact only prevented from starving by Negro slaves who stole food from their masters and gave it to them. The sad thing is that there was little they could do about their poverty. There were literally no jobs because all labour was done by the Negro slaves for free. Economically speaking slavery was to them â€˜a scourge from Godâ€™. It closed all avenues of upward mobility. As long as it existed few could escape from poverty and in poverty.

Yet instead of opposing it, they fiercely supported slavery. When the American Civil war started in order to end slavery these poor southern whites gladly fought and died so that slavery might live! Why? These people, ravaged by poverty, lost their sense of worth. They were called the â€˜white trashâ€™ even by Negro slaves.
The presence of these Negro slaves however somehow salvaged a little self respect for them. As long Negro slaves existed the â€˜white trashâ€™ could not be at the bottom of the totem pole. That was the permanent preserve of the inferior Negros who owned nothing, not even their bodies. They therefore liked the presence of miserable Negro slaves because they always reminded them of their superiority even in poverty and frustration. They could also, on the basis of shared color, have sense of comradeship with the very wealthy white planters that owned hundred of slaves. In these conditions the poor whites never attempted to do the logical thing- revolt against slavery and the white planter elite.

The same situation is what many poor Ugandans find themselves in. Millions of frustrated, hopeless youths living in the indignity of poverty have a lot of anger against the ruling elite. Thereâ€™s nothing they have in common. These people have had their self esteem and dignity ravaged by poverty. However, the presence of a homosexual, who is not a â€˜real manâ€™ makes them feel somehow superior.

They feel worth peoples respect when compared to that inferior homosexual. Whatâ€™s more, he realizes that the wealthy political elites are not his superiors but his equals; his comrades. That as far as they are heterosexual they are both superior people just the same way â€˜white trashâ€™ and wealthy white planters thought themselves superior on the basis of their skin color. The same way the poor whitesâ€™ anger was directed away from their fellow white slave owning planters who indirectly oppressed them towards powerless Negros is the same way Museveni has managed to turn away the anger of his fellow poor heterosexual Ugandans from the corrupt Ugandan elites like himself towards powerless homosexuals and women with liberal lifestyles. As long as the anger is not towards him, thereâ€™s no fear of revolt just the same way white elites had no fear of revolt from poor whites.

Itâ€™s however singularly unsettling that we blacks, a race that has borne the brunt of intolerance for much of our existence, should now dish out the same to our brothers and sisters. Itâ€™s one thing to be revolted by somebodyâ€™s lifestyle and a wholly different thing altogether to pass laws punishing that person with life imprisonment.

As they say, before you judge a man walk a mile in his shoes. No one can tell what Jews went through in Europe or blacks in the US for being different. Difference from the majority (both sociological and numerical) can never be a punishable offence. Tolerance has emancipated women and given our black brothers wherever they are dignity and honor. It must be encouraged. We cannot start rolling back these gains.

Museveni, for political reasons, should not allow himself to be the Draco of our time, passing extreme laws that cause more harm than good. By official encouragement, McCarthyism destroyed the American society through suspicion, denunciations and mob rule. Museveni must not allow a similar fate to befall the beautiful Pearl of Africa.