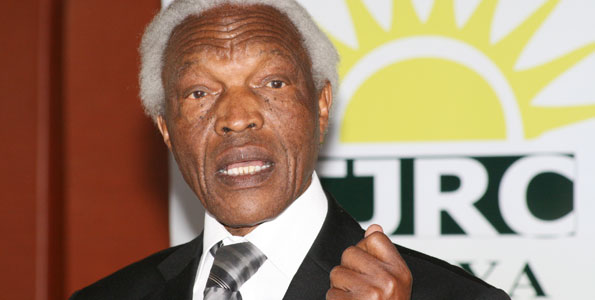 On Labour Day a few days ago, President Uhuru Kenyatta strode into an empty park to address the workers of this nation. He was welcomed by his Deputy William Ruto and COTU Secretary General Francis Atwoli among others.
During that ceremony, the enthusiasm by the crowd towards the new president was at its lowest. In fact, the media, acting ethically, avoided showing the crowd.

Kenya moved on after the May 1 celebrations.

Lost in the pages of newspapers is the long overdue report by the Bethwel Kiplagat led Truth, Justice and Reconciliation Commission. This commission which ought to have completed its work months ago had their expired term extended by the 10th Parliament because the report would have â€˜aidedâ€™ some candidates when questions of historical injustices could finally be answered.

During the presidential debates and indeed throughout the campaigns, historical injustices were presented as too sensitive for political discussions or public discourses. The gag order was too costly for campaigns of a certain candidate and coalition. On the contrary, it presented an escape route to another candidate and his alliance.

The churches, the NCIC, the intelligence service and even some of the commissions put a spirited fight ordering politicians to avoid discussions on historical injustices and land claiming certain politicians were only raising ethnic emotions to garner votes on issues which were being â€˜institutionallyâ€™ dealt with amicably.

There have been reports over the media that the TJRC has been trying in vain to meet the president. One wonders why a government deeply disturbed with a spiraling wage bill would want to keep spending millions in wages on commission whose term is already expired. Is the President deliberately avoiding meeting the commission so as to delay having the report? What is so offensive in this report? Why is the TJRC report not being released? Is it being doctored? Is it being moderated as not to disturb peace?

Among other things, this report is meant to document the land problem in Kenya since independence and put faces to grabbers who used government connections to disinherit whole communities and societies. The President whom during the presidential debates had sensationally claimed his family owns huge tracks of Land at the Coast may very well be the biggest single casualty in this report.

The Deputy President, also an alleged grabber with an ongoing case at the Eldoret Law Courts, having illegally acquired land belonging to an IDP (how greedy can one get?) may also be on the spot.

Apart from land issues, the TJRC report will also present systematic violations of Human Rights by the despotic regimes which have ruled this country.
As the delay to make known the findings of this commission get bogged down in a barrage of political mendacity and parliamentary antics, a bigger debate is soon facing Kenyans: Is this jubilee government, as presently constituted, and headed by two people who are already subjects of international judicial processes, due to atrocious violations of human rights, able to preside over an era expected to be crucial in bringing perpetrators of historical injustices in Kenya to justice?

While politicians currently in the ruling alliance had claimed their victory was a referendum on the ICC; are we seeing this narrative changing to be a referendum to push historical injustices which this commission wants to present to another generation and another president? Why is the TJRC report being delayed? What signal will this send to proponents of the rule of law and the international community?

Among the findings in this report ought to be a detailed account of Political Assassinations and Killings since 1963, Political Violence and Killing of Democracy Advocates; Massacres and Possible Genocides; Torture, Detention, Exile, Disappearances, Rape and Persecution of Opponents; Politically instigated Ethnic Clashes, Violations of Economic, Social and Cultural Rights, and many other heart-wrenching events which the commission collected from Kenyans.

This report is a big headache to the jubilee government and particularly the President and Deputy. In a cobbled up alliance of two tribes with deep rooted animosities between them, this report has the potential to tear asunder just as The Hague brought them together. For the first time, ethnic cleansing in the Rift Valley from the period covering Moiâ€™s reign up to the bungled 2007 elections may get new faces.

The peasant Kikuyu and Kalenjin are waiting to see how the land question in the Rift-Valley is being handled.

The Luo too are eagerly waiting answers to a spate of community travesties which have killed some of their best and brightest. More than deaths, this community will also wait to see how economic policies of both the Kenyatta and Moi regimes led to its present situation of economic penury and political minority.

The Somali are waiting to see whether perpetrators of the Wagalla Massacre can be brought to justice and living victims be recognized and compensated.
For the record, I am well aware (though not very) of the â€˜tightâ€™ schedule of the President in the recent past: naming cabinet, receiving foreign dignitaries, watching secondary school children dramatize humuor among other engagements but this report is way more important than the presidentâ€™s current engagements. It is the document around which a new national conversation is set to spring from.https://www.kenya-today.com/opinion/truth-justice-and-reconcilition-commission-kenya-report

The TJRC report is Long Overdue.