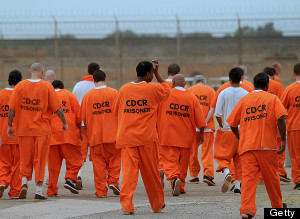 It would appear that a good number of Kenyans in the USA are now serving long sentences in prison. The activities they used to do in Kenya cannot be tolerated in the USA and so many of them find themselves on the wrong side of the law.

A Kenyan woman has been jailed for six years in the US for attacking an elderly sickly man.

Anastasia Wanjiku Oluoch, 59, pleaded guilty to three counts of abuse and neglect of Mr Johnny Taylor, 90, when she appeared before a Maryland court on Thursday. She had been charged with attacking Mr Taylor, who she was looking after in 2007.

The savage attack on the sickly man, which was caught on tape, caused public uproar in the US.

In a different case, just 72 hours before Edward Mundia Mwaura attacked his wife and stabbed his daughter to death, he was sitting in an Indiana jail on suspicion of violating a protective order.

On Thursday last week, his estranged wife, Ms Lucy Mundia, called police to report that Mwaura had violated an order she had sought to protect herself and their six-year-old daughter.

And in Bangor, Maine â€” A native of Kenya who obtained permanent residency status in the United States by entering into a sham marriage with a Maine man was sentenced Friday in U.S. District Court to one month in jail. Christine Njoroge, 42, of Worcester, Mass., pleaded guilty in May to conspiracy to defraud the U.S.

The man she married, Jason Neas, 27, of Newport, was sentenced in July to twice as much time behind bars and ordered to pay a $2,000 fine, U.S. District Judge John Woodcock said in imposing Njorogeâ€™s sentence. The judge ordered Njoroge to begin serving her sentence on Feb. 1 and sentenced her to one year of supervised release after time in jail. She remains free on bail.

Woodcock said the woman was one of more than 20 Kenyan defendants he has sentenced so far in the marriage scam run by two Kenyan men from Massachusetts.

A Kenyan woman has been sentenced to 21 years in jail for stabbing her roommate to death in 2010 in the US.

The sentence was handed down on Monday by Texas Circuit Court judge William Cole, who also took into consideration the time Kinuthia spent in jail awaiting trial.Ms Munene was found dead in a pool of blood and with multiple stab wounds on June 11, 2010, after friends contacted the police when they failed to reach her.

Kinuthia, who was alleged to have gone into hiding, resurfaced two days later. She called her pastor, telling him where she was.

The two women were both members of a Kenyan church in Alabama.

After her arrest in 2010, a detective testified that Kinuthia told police that she had a large steak knife and that she stabbed Ms Munene in a rage during a conversation.

A HIV-positive Kenyan man has been jailed for 66 years by a US court for raping two teenage girls two years ago.

â€œI believe from the evidence that Karanja is a sexual predator,â€ Scrivener said.

And as Karanja began his long stretch in a US Federal jail, it emerged yesterday that he had a history of sexual offences dating back to his youth.

A close relative who spoke to the press said: â€œKaranja has previously raped women in Kenya, but his victims were too scared to come forward.â€

This piece was first published on 27 August at http://whereiskenya.com/traumatic-report-of-kenyans-rotting-in-the-usa-jails/