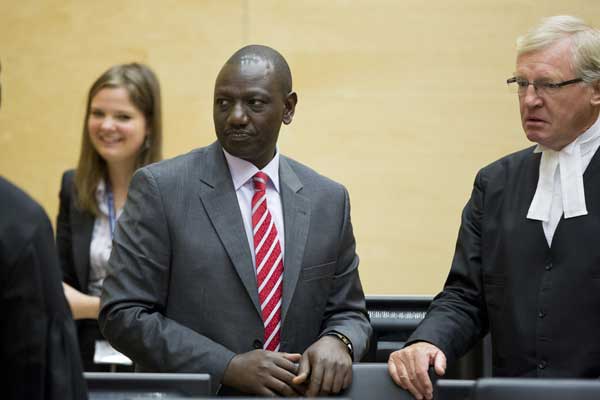 Looks like top government officials are out to antagonize deputy president William Ruto even further after setting him up at the ICC. After failing to convince African Union member states to pull out of the Rome Statute that set up the ICC, Jubilee top machine made serious claims against the reputable UN backed International Criminal Court that the Hague based court is financing Mungiki and other terror gangs in Kenya.

The appalling claims made top lawyer P Mwangi wonder if the remarks were well thought out or it was a ploy to provoke the ICC in order to have deputy president William Ruto jailed? Here are the two critical questions ;
1. Is it advisable for the Kenya government to be insulting the ICC while the Deputy President’s case is still pending there ?

2. Were the interests of the Deputy President considered before this antagonistic statements were made?

Deputy president William Ruto has religiously honored the Hague court summons and other than afew instances at the start of the trial where he made some posturing remarks- he has overall showed remorse and respect to the court both in court and outside. Ruto knows he is walking on a tight string and is not taking any chance that can see him rocked at the Hague.

By antagonizing the court, the judges who are human may be influenced by the continued posturing by the ever calculating Jubilee mafia whose intention may be to have Ruto jailed and effectively get their revenge for whatever ills Ruto and his allies may have wronged them!

It is on record that all the prosecution witnesses are PNU members the predecessor of Uhuru’s party TNA.