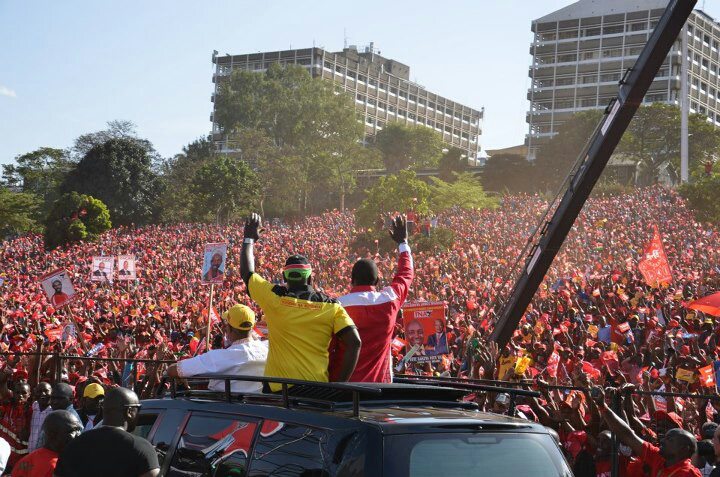 It is no longer a secret that William Rutoâ€™s URP is merely escorting Uhuru Kenyattaâ€™s TNA into power. Jubileeâ€™s final rally at Uhuru Park was a testimony that the William Ruto led Party was just a special purpose vehicle meant to mobilize and turning a community to a voting machine. It was not lost to those who followed on live television that the rally was more of a TNA event than a Jubilee final submission to Kenyans, putting to doubt the 50:50 power sharing agreement.

â€œThe Jubilee branding team is done from a centralized pool, it is actually single sourced and we all know where the money comes from, they can easily release equal number of branding materials of both URP and TNAâ€ John Kipkurui, a Nairobi based political pundit noted.

â€œThis is a deliberate attempt to depict URP as a junior partner, otherwise why was it possible to have balanced branding in Kapkatet, and not in Nairobi?â€ Kipkurui added.

A leading Nairobi based political analyst joked, â€œRuto’s shirt is usually the only yellow attire at Jubilee rallies. I’ve never seen a man who enjoys slavery like that!â€ With only one day to the general election, URP supporters are disappointed that their party is being treated like a junior partner in the Jubilee yet they are supposed to be equal partners in every sense.

Recently, grassroots leaders in Rift Valley complained that Jubilee branding strategy was care-fully crafted to give TNA the upper hand in the power games playing out before the eyes of the public. The leaders complained of the arrogance with which TNA crowds clad in the predominantly red colours were transported into URP strongholds.

This is despite the pre-election agreement that brought Jubilee into existence, which is said to provide for a 50-50 power sharing between URP and TNA. This agreement has never been brought to the public domain strengthening the fear by URP supporters that Uhuru Kenyatta might not honour the agreement were he to become president.

â€œAll this started in Nakuru, we raised it with the secretariat but we were dismissed. It extended to Eldoret, Kapkatet and now Uhuru Park,Â  I now understand why many of our people are even demanding that the agreement between TNA/URP be made public before voting day. Otherwise, chini ni URP, juu ni Raila.â€ Peter Lagat a URP stalwart from Kericho noted.

I drove all the way from Kericho to attend a Jubilee rally only to find it was a TNA rally, Lagat added.

Many have dismissed the coalition as a paper agreement between two people and this is what Joshua Sang confirmed publicly. During party nominations, those who lost in ODM and were unhappy opted to vie in Wiper. It was the same for those in other parties within CORD. It is worth noting that no politician in URP zone opted for TNA, just like it is in TNA areas where no politician opted for URP when nominations took place.

It is clear that the rather cosmetic arrangement in the name of Jubilee will not work as URP supports declare, â€˜Show us the full coalition agreement and we show you the vote.â€

It is not too late for Jubilee to remedy the situation, through a paid up advert on the weekend newspapers spelling out the details of the agreement, to reassure the jittery URP base.