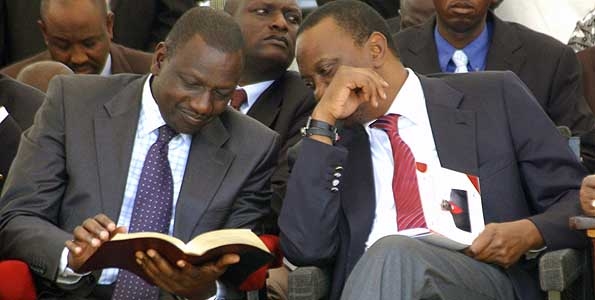 We could understand the lamentations of ODM governors, Wycliffe Oparanya (Kakamega) and Julius Nanok (Turkana) (among others) and Wiper governors led by Dr. Alfred Mutua. Because during the just concluded general elections, they stood on the CORD side that genuinely were pushing for full implementation of the new constitution and total fidelity to devolution.

But Isaac Ruto and William Kabogo were part of the most stubborn supporters of the Jubilee Alliance whose principal individual propellers were known enemies of the new constitution.

When us in CORD were eying reforms, devolution, national conciliation and a triumphant entry into the second republic for Kenyans, they were more keen on fighting Raila Odinga (the CORD leader) while mobilizing along parochial ethnic lines.

We told them and their supporters that a Jubilee government was designed to be a proper, conservative inheritor and perpetrator of the status quo and will protect the vices of the past including impunity, the provincial administration, disregard to the constitution and corruption; but instead they called us names and pushed the Jubilee agenda.

Now we hear Narcâ€™s Senator for Nyeri County, Hon. Mutahi Kagwe is poised to be Senate Majority Leader. Also somebody from same region will become Head of Public Service and itâ€™s possible key ministries like Finance, security and defence plus Foreign Affairs are destined for the TNA stronghold of Central. URP will be given crumbs!

We can confidently laugh at Isaac Ruto and ask him to stop lamenting over spilt milk. They should know that they were brainwashed into following URP leader William Ruto blindly into a trap.

Their only path for recourse is to rebel and start mobilizing both in the Senate and National Assembly for a vote of no confidence in their Jubilee government to pave way for the election of a pro-people government that will implement the new constitution to the fullest.

As the Swahili say it, kukosa sio kosa, kurudia kosa ndio kosa. They also say, Ngâ€™ombe akijikwaa akaumia guu, hujikokota na kurejea zizini. Please Mr. Ruto needs to lead the way in breaking from the obviously treacherous Jubilee bandwagon to the reform side. We are waiting eagerly to forgive them, receive them and rehabilitate them. From the Naivasha experience he should know that the betrayal has began. There is nothing for URP in this jubilee government save for regrets and anguish.