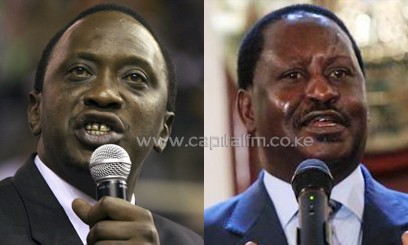 The debate was highly anticipated and it did not disappoint. Kudos to the organizers, they made Kenya for once in a long time compete with the best in the world-the US. Dida provided the vital comic relief to temper what would otherwise have been a tense affair. The preliminaries end there and we proceed to serious reflections from the debate.

The debate was divided into two segments. The first segment moderated by Kai Kai was more engaging though I still think Dr. John Sibi Okumu should have had a role. If gender balance is required even in such a matter as debate moderation, then the organizers should bench Julie next time and look for a certain Kathleen Openda Mvati!

Like every other front runner in a contest, Raila Odinga and Uhuru Kenyatta drew most interest and scrutiny even by the other contestants. It was a good platform to hoggle the limelight but more than that to dispel common misconceptions stereotype and propaganda against them. It is on this basis that we analyze the horses. I donâ€™t want to analyze the performances of flower girls. Someone would call them donkeys but I wonâ€™t because I am not competing!

The organizers did well to divide the debate into issues that matter most to Kenyans. The two most compelling ones were issues of ethnicity, ICC and territorial integrity. I am disappointed that the emotive issue of land was kept out of the debate. It is shameful that we should pander to the whims of the new Inspector General of police to shy from debating an important national matter as land on the excuse that it is emotive. The Bill of Rights guarantees all of us without exception the right and freedom to express ourselves!

On the issue of ethnicity, Uhuru Kenyatta reiterated the position of the Jubilee Alliance as captured in their manifesto. Raila on his part took Kenyans down memory lane, explaining that ethnicity is a tool that has been used over the years by the elites to manipulate the poor masses to retain power and the control of resources. He reminded Kenyans that despite their different ethnic backgrounds, he was still friends with Uhuru Kenyatta. That was a generous gesture that the latter failed to reciprocate.

Raila also stated that he has demonstrated time and again that he was a nationalist, not a tribalist. He explained that he was able to mobilize luos to vote for Kibaki in the year 2002. KaiKai was unable, to my disappointment to put Uhuru on the carpet regarding his decision to jump from the Orange party to support Kibakiâ€™s presidency, so soon after they fought the bitter 2005 Constitutional referendum battle in opposing camps. What was his motive if not tribalism? At least Kalonzo ran alone!

Ultimately, Raila drawing from the context he established in his explanation concluded that he was a nationalist. In as much as Kenyans belong to tribes and are not invented in the moon, he has worked with everyone in the past, not as a tribe but as a Kenyan. His presidency would therefore not discriminate on the basis of tribe or other form of discrimination.

He was also able to explain that the issue of tribe was one about competition for resources. He drew the analogy that if resources could be distributed equitably, then the belief that electing one of your own would secure for your tribe most allocation of resources would cease. It was why he championed devolution and campaigned for the promulgation of the new constitution. That is how he ran away with the debate on the issue of ethnicity!

The ICC was another matter that drew a lot of interest. Uhuru yet again failed miserably on this platform when he failed to explain how he would run a government while attending to trials at The Hague. His deputy would also be at the Hague. Dida and Karua threw some feeble jabs at him on this and Raila was careful to explain that he had supported a home grown solution but for the belligerence of the accused themselves and their lieutenants, the matter ended at the Hague.

Raila was careful to suggest that he would not wish to eliminate competition by supporting the idea that Uhur and Ruto should not run but unleashing his choicest zinger yet, wondered aloud how it would be possible for the Uhuru and Ruto ticket to run the government by skype.

Truth be told, it is tragic to give Kenyans the choice to elect folks facing charges for the most heinous crimes known to man. Uhuru suggested that the ICC was a personal challenge like any challenge every other folks have but I think it was a cavalier way to handle a matter so critical.

Paul Muite gave Raila the chance to exonerate himself from the common gossip that he and Kibaki had a role to play in the Post Election Violence and he seized the challenge, stating that The ICC did not dream the names in the Annan envelope. The names were reached at after elaborate investigations. he still welcomed the Safina government, assuming, even remotely that Paul Muite will win the election, to take him to the Hague.
By the time the ICC issue was concluded, Raila had shown that he supported a homegrown solution to the Post Election Violence issue but was sabotaged by the suspects themselves. He welcomed their competition because he did not fear them but showed that it was not a good prospect for Kenya that they should be on the ballot. He also answered Muite that he had no role in the Post Election Violence and for the second time, ran away with the debate on the ICC issue.

Another matter of interest was about territorial integrity. Specific reference was made to Migingo island on Lake Victoria, which is the most emotive border dispute we have with Uganda. There are others, for example, the Elmi triangle with Ethiopia.

On this subject, it was Paul Muite who sounded most like a commander in chief to me though some folks argue that his rhetoric was dangerous and bordered on the irresponsible as he could take Kenya to war with friendly neighbours at the least provocation.

From this analysis, in which I set out to compare the horses, Raila scored 2 out of 3. sadly, I give Uhuru Kenyatta a half point out of three for emphatically stating that Migingo is in Kenya. He merely recited the jubilee manifesto. He skirted around the issue of ethnicity when he was required to confront it head on. He was required to similarly confront the issue of ICC. He skirted again around it. The issue of ICC was his opportunity to dispel our anxieties about the matter. It was called the elephant in the room. He failed to deliver and our fears and anxieties persist about the possibility and damning consequences of electing an indicted ticket!