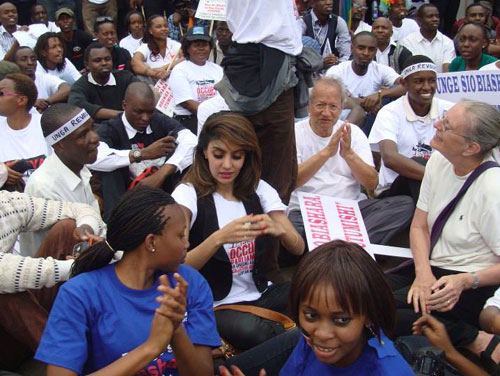 The Occupy Parliament May 14th protests made one thing clear, there is a new breed of activists in town. They are among thousands of young Kenyans from all walks of life, who are changing the face of activism. On their Facebook pages they received words of appreciation and encouragement after updating that they were arrested during the protests.

In the past, the image of an activist was that of an unkempt, grumpy and sometimes violent person, who destroyed property during protests, harassed motorists and hurled insults and abuses to the public. This is what the new crop of activists is changing.

Here are the current leading activists in town

This researcher and University of Nairobi graduate is the President of Bunge La Mwananchi. Cidi also holds the position of chairman and convenor for the Coalition for Constitution Implementation, a lobby group of civil society bodies pushing for the full implementation of the constitution.

This award-winning photojournalist turned activist is no longer capturing momentous images behind the lens but cuts the infallible image in his fight for human rights. Boniface is now the man behind the popular Kenya Ni Kwetu Forum. In 2009, just after leaving employment at the Standard Group he founded Picha Mtaani (www.pichamtaani.org), the first-ever street exhibition in Kenya and currently runs Pawa 254 www.pawa254.org. Heâ€™s also involved in teh â€˜Mavultureâ€™ grafitti campaign.

Some of his awards and recognitions include a Magnum Photography Fellow, Acumen Fund East Africa Fellow, TED Fellow, and twice as the CNN Multichoice Africa Photojournalist of the Year.

For those who follow parliamentary proceeding in the august House and also hooked to street, bunge should brace for a more vibrant parliament in the slums. Well, Gacheke Gachichi is the man behind the Bunge Mashinani in Mathare slums. His interest is in pushing for housing rights in slums.

He is arguably Kenyaâ€™s foremost controversial blogger who pulls no punches. His daring attitude while addressing social issues has seen him face a few court cases.

The land question has always remained the most emotive issue in the country and in extension Nairobi. Sheikh Ramadhan, who is the national coordinator for the Nubian Human Rights Forum, has been fighting for the rights of the landless Nubians in Nairobi.

A team trainer, Lula is the coordinator for the Super Ethnic Minorities Rights Forum. She is leading the fight for smaller tribes that the government do not often recognise.

He is one of the leading forces behind Unga Revolution, a movement pushing for social and economic rights.

She is coordinating the Wanjiku platform also known as the National Citizens Forum whose aim is to mobilise people to participate in county government issues.

Kiama is behind the popular Facebook page WanjikuRevolution, the civil society social media arm that pushes for the rights of the common man.

A consultant and community development graduate, Tom is from the La Vie Foundation, a humanitarian network that specialises in the care for the elderly and ageing persons.

She is a grassroots mobiliser in Nairobi and the convenor of the Bunge la Mwananchi Women Caucus. She was influential in pushing for the failed third gender rule bill.

Patrick is from Baraza la Taifa whose main interest is pushing for housing rights.

She is a media consultant and freelance producer who has previously worked with Sarakasi Trust and Bokoyoyo International Artist Promotions.

He is a member of Labour Party of Kenyaâ€™s Youth Congress.

One of his favourite quotes is â€œDemocracies die behind closed doors,â€ that was made by Judge Damon J Keith, US Court of Appeals.

He is the man who rushed to save a fellow protester who was being clobbered by the police during the â€˜Occupy parliamentâ€™ demo.

He is the executive director of Muslim Human Rights (Muhuri).