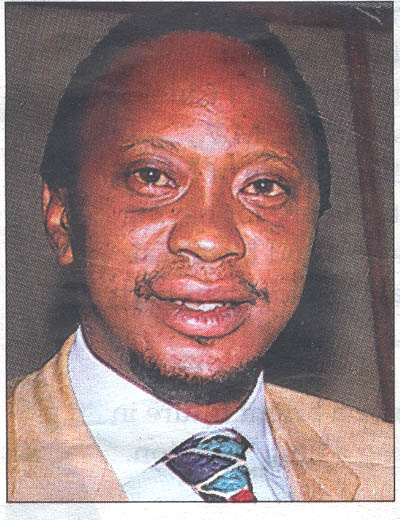 Jubilee Coalition leadership comprising of Uhuru Muigai Kenyatta and William Samoei Ruto have discerned two epithets to use as campaign materials in this yearâ€™s elections. For one, they claim to belong to a digital age hence more informed, technologically oriented and fit to lead the nation. Secondly, they pose as youth and brand main rivals, especially, Cordâ€™s Railia Amolo Odinga as old men shrouded with dotage or rusty ideas overtaken by time. Such are the adolescent reasoning fueling the Jubilee campaigns in the country today. It is a mockery.

Since Team Uhuru has made a local drum with foreign name called digital, they have beaten it as they dance to the tune. The sarcastic tune sounds analogue and they say it belongs to Team Cord. Now, that is the height of naivety reigning over the Jubilee campaigns. That is the message the people of Kenya seek to understand over the period. It is what I seek to explain in this opinion piece. I also realize it cannot be explained without elucidating political history of the key people in the divide. But I shall summarize it.

In this comparative concept Kenyans will be able to know who, between Uhuru and Raila, is really digital or analogue. Or what the two words really imply in respect to todayâ€™s politics. They will also know who is really a youth between the two; because the Constitution is quite clear about a youth by age category.

In political literature, Team Uhuru is understood to use television ages in the country to categorize generational differences of political leadership. Being that same equipment that broadcasts programs with moving pictures and sounds on a screen, the analog and the digital televisions broadcast using antennae that have the same carrier wave. The difference is the way this signal is transmitted to the television.

Television in the nation has been analog; meaning it uses an AM signal for pictures, and an FM signal for audio. Uhuru is yet to tell the nation how his father, Jomo Kenyatta’s and/or puppeteer, Mwai Kibaki’s signals failed them because they were analogs. This article will prove that he does not know the meaning of, or the difference between, the two sets of machines. If they merge to make the end result, he should shut up his mouth.

Analog television is the analog transmission that involves the broadcasting of encoded analog audio and analog video signal; one in which the information to be transmitted, the brightness and colors of the points in the image and the sound waves of the audio signal are represented by continuous variations of some aspect of the signal: its amplitude, frequency or phase. In October and November 2007 Kenya joined the rest of the world at World Radio Conference in Geneva, Switzerland, in a resolution to adopt digital television broadcasting by 2015. That would mean the televisions use digital signals to transmit pictures as well as audio.

Out of four different Digital Television Terrestrial Broadcasting standards (DTTB) Kenyaâ€™s current option is Digital Video Broadcasting-Terrestrial (DVB-T) which uses Coded-Orthogonal Frequency Division Multiplexing (C-OFDM) modulation and supports hierarchical transmission. This standard has been adapted in Europe and Australia. The technology is aided by development in computer, especially the formatted bandwidth. By these the machines program and broadcast the televisual. That brings us to the development of computers. It may not be anywhere near any of the Jubilee stalwarts.

In this analytical summary, the first freely programmable computer, Z1 Computer, was invented by Konrad Zuse in the year 1936, three years after the birth of Mama Ngina Kenyatta, the mother of Uhuru. The “Floppy” Disk, by Alan Shugart came seventeenth in that order in 1971 before Bill Gates invented the current Microsoft Windows in 1985. This â€˜interface managerâ€™ has been developed, over the years, with the help of scientists who include the late Steve Jobs.

It is the development in computing that set television in place. By this technology, a television system takes luminance, chrominance (in a color system), synchronization, and audio signals, and broadcast them. The first commercial television systems were black-and-white. The beginning of color television was in the 1950s. Mama Ngina, Uhuru’s beloved mother was yet adolescent but Raila could see what the world broadcasted.

Now, Uhuru was born in 1961 and Raila, in 1945. That is 25 years and 9 years respectively from the first programmable computer. At the advent of The “Floppy” Disk in 1971, Uhuru was in his puberty while Raila was a graduate with an Msc (Masters of Science) in Mechanical Engineering from Magdeburg (now a part of Otto-von-Guericke University Magdeburg). In the year of Microsoft Windows, Uhuru was idling and enjoying a dirty side of life in an American college, before he would be repatriated for indecent acts, while Raila was fighting for Kenya’s democratic space under the yoke of detentions without trials. Since that time, nothing has changed in the computer world except improvements; all happening under the eyes of Raila but far way beyond the reach of Uhuru Kenyatta.

Now, the question is: At corresponding ages of the two leaders of the rival coalitions, what was each doing for the country? Before Uhuru could first vie for political leadership in Gatundu North at 36 years of age, was there anything he ever engaged in on behalf of the country? At 40 years when former President Moi nominated him Member of Parliament and eventually endorsed him for Kanu flag bearer in general elections a year later, what was Raila doing for Kenya? How was analog age affecting both the leaders or where was digital? Who of them was a youth? It should be considered that in the Republic of Kenya, the Constitution identifies a â€œyouthâ€ as any individual who is between eighteen and thirty five years old. (Article 260 of Chapter 17)

As a matter of fact, history captures Raila as a crusader of change. Immediately after his graduation, he established the Standard Processing Equipment Construction & Erection Ltd (later renamed East African Spectre), a company manufacturing liquid petroleum gas cylinders. Due to his innovativeness and diligence, he was appointed group standards manager of the Kenya Bureau of Standards in 1974 where he earned a promotion to Deputy Director, a post he held until his 1982. Even though he was a civilian, Moiâ€™s government detained him on suspicion that he aided military distress and coup attempt on his Kanu government. At that time, Raila was one year older than Uhuruâ€™s first political failure in Gatundu North. Kenya never remained the same as people sought freedom from the autocratic single state. Raila remained an astute champion of the same in and out repeated detentions until Kenyans won the battle.

In 1992 when Raila first became MP for Langâ€™ata, Nairobi in a multiparty election, the long war on one party tyranny was a history. However Uhuru was busy consolidating family wealth which included vast parcels of land his late father grabbed in the nation. He was nowhere near matters affecting Kenyans.

Now when President Kibaki made Uhuru a Deputy Prime Minister and, subsequently, a Finance Minister in a Coalition arrangement after a botched presidential election of 2007, he made serious errors in financial reports involving billions of Kenya shillings. He simply called them computer errors, a veiled complaint against the technology he claims to own today.

That begs the question: Is it analog age, digital compliance or computer competence that made Uhuru and Raila be what they were and are today? If Uhuru see it all in age; old is gold, as Raila has always proved it.