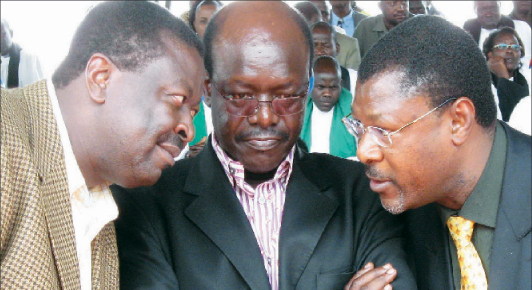 â€˜I said: â€œA tiger does not proclaim his tigritude, he pouncesâ€. In other words: a tiger does not stand in the forest and say: â€œI am a tigerâ€. When you pass where the tiger has walked before, you see the skeleton of the duiker; you know that some tigritude has been emanated there.â€™ That is one of the wise quotes attributed to Nigerian author and Nobel peace laureate Prof.Wole Soyinka. This quote should be informative to those who are struggling to gain attention through their own proclamations that they are the bona fide leaders of the Luhya community. If they truly represent the aspirations of the community, why are they using a lot of effort to claim? I pose.

Luhya unity has been a subject of discussion by a number of leaders since the demise of Michael Kijana Wamalwa in august 2003.This dream has remained elusive because itâ€™s driven by the same people who are tactless, un-strategic, and indecisive but self-seeking enough to want to impose themselves as the cartel in which the ultimate Luhya leadership must emerge.

The selfishness by this group that comprises Cyrus Jirongo, Musikari Kombo, Musalia Mudavadi, Moses Wetangula, Soita Shitanda and Eugene Wamalwa; most of whom are recent political rejects is itself the main impediment to the Luhya unity. The mentioned individuals have made it look like they hold the key to Luhya unity; a quest that they have only pursued to make themselves relevant and at least try not to be forgotten.

Recently some of the mentioned individuals convened to claim ownership to this quest that they themselves had opportunity to build but failed and misled the people to make terrible political mistakes in the 2013 general elections; leading the community to fall into Â political oblivion as a result.

The mentioned group of politicians is like what most fake witchdoctors would do to purport to solve problems created by themselves so as to earn unjustified income from their unsuspecting clients. In most societies, witches and sorcerers at night turned themselves into witchdoctors during day time.

The sorcerers would plant some witchcraft like paraphernalia at night at somebodyâ€™s homestead to scare the person. Ignorantly, the owner of the targeted homestead would early in the morning seek the help of a witchdoctor without knowledge that the witchcraft was planted by the same person he is approaching.

The sorcerer turned the witchdoctor will act like he really knows the solution and the location of the witchcraft. In most cases, the witch doctor would easily identify the perpetrator to the victim of the witch craft. One of the lines would be like â€˜the witchcraft was planted by your neighbour who stays on the left side of your farm. The person in question is neither too tall nor too short, neither too fat nor too thinâ€™ .The tricks by the witchdoctors worked because he continued getting clients. A seed of discord was sown between the neighbours without knowing that all of them were serving the interests of the village witchdoctors.

The above stated scenario is no different from what the politically rejected self proclaimed so called Luhya leaders are trying to pursue. In recent days, Cyrus Jirongo, Musalia Mudavadi and Eugene Wamalwa whether together or separately have been trying to insinuate that they have intentions of uniting the Luhya nation; something they failed when it was critically needed. Just like in the Witchdoctor analogy, they have easily identified â€˜external forcesâ€™ as the cause of the failure of the Luhya unity.

Greed, selfishness, tactlessness, cluelessness and naivety by the group of political witch doctors comprising of the likes of Musikari Kombo, Musalia Mudavadi, Soita Shitanda ,Cyrus Jirongo and of late Eugene Wamalwa is what has made the political Luhya unity continue to disintegrate during the last one decade.

Itâ€™s obvious that the said individuals had opportunity to cement, organise and entrench purposeful unity when they were still politically relevant, but instead they engaged in petty wars of egos only to wake up when their relevance has waned. For them to proclaim ownership to the leadership of the Luhya nation is in itself living in denial since their time has passed and gone. Itâ€™s only them who still think that they are relevant. In Luhya land a new leadership emerged the moment the mention political witch doctors were rejected by the people at the ballot.

The mentioned people reigned for more than ten years but it seems, they were too weak willed or lacked intellectual knowhow to unite the Luhya. They had their time to serve and they failed. They must embrace their retirement from politics and allow new focussed leadership to emerge.

Looking back at the history of the Luhya nation is proof enough that the unity of the community is possible especially if they can find a leader who is trustworthy, believable and trustworthy. Itâ€™s worthy to note that if the so called leaders made the right decisions during the 2013, elections, no doubt a leader would have emerged and unity realized without much coercion or struggle.

When Kijana Wamalwa rallied the Luhya behind Kibaki in 2002, there were no such meetings of unity or calls to unite, but the people identified a wise leader who had foresight and the whole community rallied behind him to an extend of defeating Musalia Mudavadi in his home turf because in Wamalwa Kijana, people had seen some genuine and selfless commitment.

Luhyas need not to grapple in darkness with these political failures who failed to unite the community when they were in power and influential in government. Its time to focus ahead and allow emergence of new ideas, new faces and new leadership that will help the community reach the Promised Land. It will not be hard to produce a leader who will naturally emerge and be acceptable even to other parts of the country.

Eugene Wamalwa, Cyrus Jirongo, Musalia Mudavadi, Musikari Kombo, Soita Shitanda and the ilk must know that they already squandered their opportunity; and should therefore get out of the way and stop confusing our people. Luhyas do not need any direction from anybody. A peopleâ€™s leader will emerge naturally without being forced down the throats of people by some egotistical individuals who are struggling for relevance. The time of these political witch doctors is gone; they should stop creating confusion and allow the true Luhya leadership for this generation to naturally emerge.