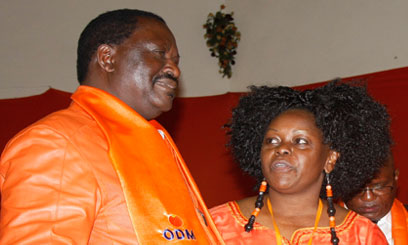 When I came across an article by Lee Makwiny tittled “ODM must get the facts right”, posted on 18th June 2013, at or around 10am, I got very interested in it due to its catchy tittle. Lee being a good writer, a serious ODM supporter and a devoted member, I expected a captivating article based on facts apart from providing references to substantiate his points.

This is not the case until you start reading this article. My disappointment was generated by the first paragraph. Lee attributes Raila’s “failure” to clinch the presidency with particular reference to low voter registration and voter turnout in Nyanza on what he calls “Midiwo’s arrogance”.

I was realy dejected by this. Why? Don’t get cheated, am not pro-Midiwo here. But I have never known that people like Lee Makwiny believe and have always believed that Raila Odinga “lost” the last election.

According to Lee, Mr. Kenyatta “won” free and square. He heaps the load of blame entirely on a single individual called Hon. Jakoyo Midiwo. I wonder how powerful this man called Midiwo!.

He goes ahead to contradict himself by introducing new sketchy reasons why we “lost” in his second paragraph. Reading through, I thought I am reading an article by a TNA mole sort of.

I had to scroll down to ascertain the author. Oh…it is Lee. He unreasonably laments that members of ODM, I presume me included, have lost hope in the party. This is lackadaisical in reasoning. He should say which members. Is it him?

He portrays our party as dysfunctional and without direction. It seems he has given up in his support for the party and is headed somewhere he hasn’t disclosed.Â  In this article, i find Lee Makwiny full of mallicious reasoning.

In paragraph four he says, “I have heard rumors from many reliable quarters that he (Midiwo) handpicked the vetting committee of seven Mps…” My question is, how can rumors be attributed to reliable sources? Unless Lee doesn’t understand the word “reliable”

When you start basing you article on rumor and careless reasoning like Lee is doing, you fail in your duty as a writer to reliably inform your readers. When you become a rumormonger like Lee, you confuse your readers and your article become directionless. Below the standard to be precise.

Lee Makwiny was not articulate. He mixes up issues like he was not sure of what to write about or not prepared. He could have saved himself the torture of contending with the repercussions of a bogus article by doing proper research before coming out open.

According to him, there is no hurry to fill the vacant positions in the party. Lee should tell us what this means. I find it strange to read such lines. I kept on wondering whether he wrote this article after much thought or he collected paragraphs from different articles to creat an article.

After spending three-quarters of his article dismantling our morale in the party, Lee later pretends to offer a glimps of hope. I found this trivial. You cannot adulterate the minds of your readers by making them hopeless then later pretend to provide the requred remedy to the challenges.

When you contradict yourself like this as a writer,Â your readers begin to suspect your wisdom. This looks like an article written with obvious intentions of pleasing our opponents for selfish gains.

Therefore, Lee should openly tell us where he is headed to rather than wasting chunks of time and space “killing” the morale of our members.

I empathize with our members who feel that we need to put our house in order. We are also aware of our own shortcomings. However, this should not be an opportune moment for those with malevolous intentions to demoralize our supporters.

I am among those who believe, and are certain that we won the last elections. I also hold the view that we need to restructure ODM to make it vibrant and competitive in the face of these new political dynamics. However, we can’t do it Lee’s style. I urge our members never to give up.

As for me and my loyalty, i will serve my party ODM.