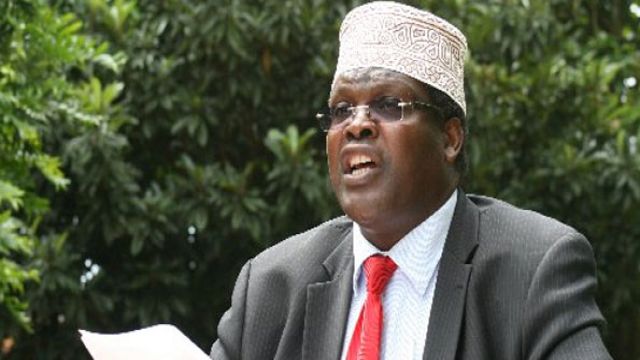 See him move his body as he responds to journalists and wonder whether the burly bespectacled man is itched in the armpit, on the neck and/or face. Hear him talk of returning to popularize his propaganda pile of redundant piece; Peeling Back the Mask, and wonder whether children humming it in home yards, river valleys and on foot paths daydream.

Miguna roared hoarse and coarse a month ago when he launched his so-called â€˜political memoirâ€™ in Nairobi. Shaking his huge trunk of body in an awesome agitation and pulse of excitement, the former aide of the Prime Minister, Rt. Hon. Raila A. Odinga, seemed to spoil for war with someone his imagination. He called incessantly; â€œCome baby, come!â€ his curling face fusing evil love.

Unduly provoked in his weird mind, Miguna perplexed all and sundry by his apparent rage against a shadowy opponent. Evidently, he was a rhino released from a cage; charging aimlessly through a thicket. It would take him two days before he would traverse the thicket, and when came to a clear ground; he literally flew away on wings of a vulture.

When he landed in a land unknown, he called it Canada. There he said he had gone to â€˜popularizeâ€™ the redundancy. Ordinarily, people wondered what he had carried away with him. Yet majority others believed he had gone to hide the shame on his charred face. Or maybe, he had gone to rest his head after goring trees in his ravenous charge!

When Miguna ran away in the midnight of around mid July, 2012 to a silent hideout, he resounded through local echoes that he was on a mission to popularize his pet project, the book. That was the much the people heard of him before he would fax newsrooms that he would be back mid this month to â€œtell off his â€˜criticsâ€™ and begin 47-Counties popularity tour of the countryâ€.

Mr. Miguna must not be excited about anything … He should not set Kenyan society aside and work in warmth crazy specialty. He should not act in breach of comity. He should embrace conducive communion compatible with common sense. Without this sense, man is mad.

When Miguna pronounced he would popularize his book in the Diasporas, Kenyans set their ears to hear the amount of popularity space one man would do to the nation in the world. People thought the â€œcome baby, comeâ€ tune would reverberate back to the land from afar. It was seldom or never. The little Migunaâ€™s name came about was his suffering in a college hostel where he lodged after he could not get a suiting refuge. It beats fathomable sense why Miguna really lied about what he really was. It was a waste of time altogether.

After wasting time in trouble, Miguna got a relief when his associates called him back to Kenya to rejoin the choir and sing from within. It is an escape from profession, especially, when a man studies law to use it in composing propaganda. As if it not enough in the book, the man has returned to the scene with his only tune: â€œCome baby, come!â€ It is the only thing in the book, in the mind and on the face. That is what he wants to take to boys and girls in â€œthe Countiesâ€.

Come baby, come! They sing it to tune one another or play their peer games in the fields and the corridors: â€œCome baby, come!â€ That is what an adult of Migunaâ€™s caliber would be entertained singing in political rallies as he dances to the tunes of his financiers. Even Hon. Gerald Otieno Kajjwangâ€™s â€œMapambano mapambanoâ€ resonates betterÂ  with ordinary citizens than than the childish â€œcome baby, comeâ€.

Mr. Miguna must not be excited about anything. He should be sentient that he tells no Kenya any news about the nation or anybody. He should not feel engrossed in his own world. He should not set Kenyan society aside and work in warmth of crazy specialty. He should not act in breach of comity. He should embrace conducive communion compatible with common sense. Without this sense, man is mad.