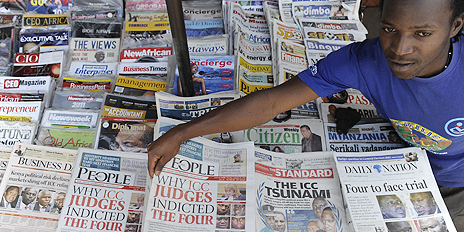 Election malpractices are huge than even The Artur Brothers or even Standard/KTN raids debacle. Freedom and liberty gets preserved and carried on through credible elections. Credible elections are the sustainable way to prevent Kenya from becoming like Syria or Iran- a pariah state.

People say, donâ€™t attack the media, but here is something more powerful than the presidency behaving badly, its malfeasances and impunity growing from publication to publication and its greed and excesses has to be checked.

Truth be told, the media was freer during dying days of the Kanu era than it is today. Moi was more committed to free press than some of the media practitioners and leaders. Like in Religion, you are more faithful to your religious ideals when confronted by temptations and trials. Thats the probable explanation.

The Kenyan media needs to realize that had elections going back to the 60s been credible, the old bureaucrats who believed in â€œrattling snakesâ€, would have been eliminated somewhere along the way. But thanks to incredible elections, they survived.

A cabal of the same elements are now in the coalition which was declared winners- the coalition currently being accused of rigging at The Supreme Court. Some of the media houses be warned, if you are invaded donâ€™t come crying to us. You failed Kenyans in preventing future raids on media houses. You failed to report suspicious election tallying.

Kenyans have no faith in most of their institutions, and it sad that the Forth Estate finds itself in that â€œno faith categoryâ€. When the leading media houses were invaded by security agencies, Kenyans stood by them when they made that distress call. And we saved them from obliteration by machinations and intimidations by the powers that be- who are now part of the dispensation accused in court over election irregularities.

This moment is Kenyansâ€™ turn for the media to stand by them. The masses are silent and peaceful, but deep inside and in blogosphere, they cry. They are just saying that we need someone to watch over us. They are crutching on straws waiting for that one institution that can protect, defend and uphold the truth. They worry that a powerful and influential section of the Kenyan media is in bed with the wielders of impunity and status quo.

Articles like this http://www.nation.co.ke/oped/Opinion/-/440808/1723738/-/k4r1buz/-/index.html in the media threaten our foreign interests; someone may argue, and appear like those anti-West rants I have seen in State Iranian and Syrian media publications. They sound like propaganda spewed out by state owned media run by dictatorial regimes like Saddam Husseinâ€™s Iraq, Hitlerâ€™s Germany and Ahmadinejaadâ€™s Iran.

But sadly they have started appearing on â€œfreeâ€ Kenyan media anyway. Thatâ€™s a hint to where our nation is headed, but Kenyans are asking them to go down that path alone. Not with us in that path of preparing the ground for a pariah state. Read this http://www.trust.org/alertnet/news/zimbabwe-suspends-ngos-as-possible-election-looms/ and you will see parallels or even this http://www.newzimbabwe.com/news-10321-Police+raid+election+NGOs+offices/news.aspx if you like.

Another example, the author of this article http://www.nation.co.ke/oped/Opinion/-/440808/1725760/-/k4pmm3z/-/index.html is only addressing the symptoms, rather than deal with the causes. He fails to delve into the cause of the ills that bedevil the Kenyan society. The Kenyan society on social media is bitter for real, but why are they bitter? Vitriol in the social media is a symptom of despair. Kenyans are crying for repair. A healing of their wounds. A breakdown in all facets of the system.

The Kenyan media has chosen the Iranian way over free media. Good luck. Sow the seeds and we shall watch in the sidelines as you reap them. Certainly the free media houses are known, and when Kenyans defend those ones, they are defending free media. But for the biased, appendages and satellites of evil political outfits- next time you are invaded, bear that cross alone.
But what does the author of http://www.nation.co.ke/oped/Opinion/-/440808/1725760/-/k4pmm3z/-/index.html expect when since independence; the only credible election was the 2002 election? And it isnâ€™t because the Uhuru- Kibaki duel was fully credible, itâ€™s because the huge gap cancelled any effect that Uhuruâ€™s Kanu irregularities may have committed in the 2002 Kenyan election.

Thereâ€™s not a thing within the cards and books that Kenyans havenâ€™t employed to liberate themselves from the yokes of political bondage and institution. Bullets wounds, assassinations, demonstrations, violence, voting, smelling tear gas etc.
Media- keep silent now, but donâ€™t come out in later years with an exposeâ€™ about 2013. Keep it to yourself at that time. It will be too late. You turned your backs on us when we needed you the most. When you get gagged again, donâ€™t scream unto us. You shall have brought it unto yourself.
The media as currently constituted should be left to die its own death, to give room for the thriving of the new, Free and alternative press. Kenyans wonâ€™t rescue you.