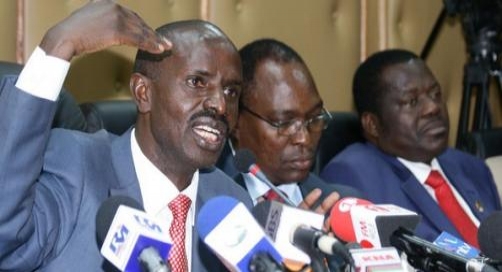 President Uhuru Kenyatta and his deputy William Ruto assumed offices amidst optimism, youthful exuberance and record compatibility. They were gutsy and plucky. However, their cockiness is under tremendous test. Optimism has locked horns with pragmatism.Â  With current wasteful expenditures, wage inflation and unrealistic promises such as laptop for students and free health care including free maternity care; Uhuru administration is facing the biggest test of implementing Jubilee agenda. It is the test of a lifetime.

Yet if you ask me, the economic landscape of Kenya is at a risk of sliding into recession. Thanks to persistent industrial strikes. Unless emergency economic rescue strategy is incorporated in Uhuruâ€™s plan, unemployment will go up, corruption will be rife, insecurity will escalate, there will be hindrance to delivery of services and life will become unbearable for the poor and the low income earners.

Un-mitigated strikes are posing greatest threat to economic growth and doing harm to our already ailing economy. Instead of working, our nation has turned into a walking nation. Can a walking nation better her economic situation? Absolutely not.Â  A non-working nation slowly but surely imposes upon herself economic sanctions.

Unfortunately, our Lawmakers of the 11th parliament set the precedent. They became the first â€œwalkingâ€ state officers. Instead of working, they went on â€œstrikeâ€ demanding for unjustifiable salary increment. They also threatened to disband Salary Remuneration Commission (SRC). They in essence opened the floodgates of strikes. Their example was replicated across the board.
Civil servants followed suit. They demanded for pay increment. â€œNo pay increase, No workâ€, they asserted. Nurses followed suit. They demanded better working terms and conditions including better remuneration.Â  They threatened to down their medication, stethoscopes and syringes. Police are said to be operating under a â€œslowâ€ strike. I pray they do not down the gun.

Teachers are now walking in the same â€œstrikingâ€ footsteps. They proclaimed they do not â€œeat dialogue.â€ They want â€œhandsomeâ€ salary and allowance increment. They have downed pens, pencils, chalks, books and boards. More damning, however, is â€œunga uprising.â€ Ordinary Kenyans are up in arms. Theyâ€™re opposing perceived plans to hike prices for basic commodities. They have threatened to go on strike if prices are hiked.

Can our developing nation survive such massive industrial strikes? I doubt it. Sadly, strikes will debase Kenyan economic status. Economic specialist Mr. Robert Bunyi who is also Managing Director for Mavuno Capital opines: â€œOne of the biggest risks facing the economy right now is the public sector wage inflation. It may not be sustainable and maintaining it will erode crucial capital investments.â€

Thatâ€™s why President Uhuru Kenyatta and his economic advisory board must summon courage, assemble the smartest economic minds in Kenya and move with a sense of urgency to prevent economic depression. He should resuscitate our ailing economy before it moves into ICU. As a politician, Uhuru should devise a political solution to economic problems, first; by negotiating nationâ€™s way out of strikes.