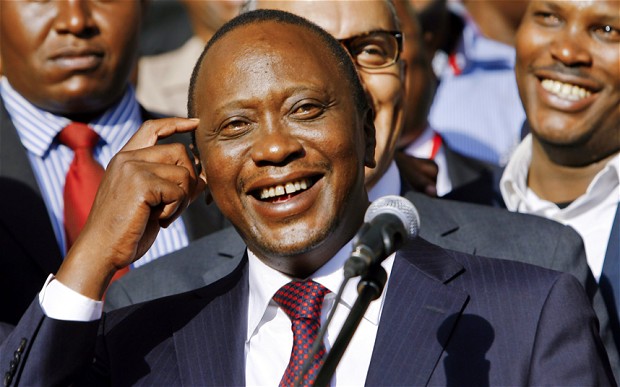 Word doing rounds is that there was celebration in statehouse Nairobi to for a fast victory in successfully laying ground for amendment of the 2010 constitution, it is reported that the top leadership took to the kitchen to cook and serve the Propaganda team for a work well done.

The celebrations were hinged on the quick and successful rollout of a strategy for â€œeasy governance with a sharp focus in 2017 electionsâ€. The Strategy adopted in December 2013 on the premise that the ICC narrative was quickly dying out hence anew â€œenemyâ€ had to be identified around which the Jubilee duo will rally Kenyans against.

Phase I of the strategy offers the operational rollout whose aim is to have the national debate focused on non-existing issues that will not hurt the image of the regime- that explains WHY the public wage bill is currently a hot issue.

Phase II of this scheme is to take the country to a referendum in which the 2010 constitution will be mutilated back to near a standard of our old constitution or something worse.

â€œwe have effectively poisoned the minds of Kenyans as far as matters of Devolution are concerned, it is a matter of months and we will have the constitution that the President and his deputy are comfortable withâ€ a hard core Jubilee operative said on condition of anonymity.

It should be remembered that Ruto was the captain of the NO campaign (opposing the then new constitution) while retired president Moi was the patron, Uhuru was a YES campaigner during the day while at night he was NO to the core, it was further claimed that he (Uhuru) financed the NO team.

Already the 2010 katiba has suffered a big blow as it has been abused by the executive like in the case of retention of County Commissioners who are accused of usurping the powers of elected county governors.

You may agree that the execution of the strategy is already a success; the focus has shifted from the core issues affecting the economy â€“ especially those touching on poor governance and incompetence like the role of corruption in the ballooning wage bill, how much will the Standard Gauge Railway (SGR) cost? What is its value? What about the unconstitutional tribal appointments?
If indeed wage bill is the elephant in the house then WHY is Uhuru appointing advisors earning millions of tax payers money yet the positions are unnecessary? The public service commission is on record saying there are more than 20 special advisors earning millions of tax payers money every month.

If Uhuru is concerned of the ballooning wage bill then why could he hold meetings in expensive luxury hotels? Why does Ruto have to go Hague with more than 25 staff from his office (cooks, presidential escort, media etc) and hire expensive taxis and outriders when the host countryâ€™s prime minister uses a bicycle and often walks to work? Is The Hague so dangerous to warrant such security detail of more than 10 presidential escort officers in private trial? Is Ruto so important than the Dutch PM who uses bicycle in the Hague? Why not hire just modest taxi with no outriders?

To confirm that the wage bill debate is propaganda take an example of USA, the world super power and biggest economy; USA is run on debt yet the citizens are not jigger infested I mean poverty is a lien in USA. Why is public debt that standing at 55% an issue while in countries where it is +80% is not an issue?

Truth be told, the economy is stagnated because Uhuru as finance minister in the Kibaki regime molested the economy, remember the dark deals under his watch when the dollar hit highest low ever against dollar?the rumour then was that the regime was raising cash the 2012/13 campaigns
The truth of the matter is that our traditional lenders; Europe and USA have pulled out of funding essential projects and China (the Jubilee Love) has refused to bridge the gap.

If Uhuru is worried of the economy then he should free up the thousands of hectares of idle Kenyatta land for locals to cultivate and do business, he need not give it for free BUT allow people to rent it cheaply for say a period of 10 years and do farming.

Thanks to gullible Kenyans, quick to forget and dancing to tribal jingos- we are going to the referendum to kill devolution and mutilate the constitute and did Mutula Kilonzo raise the red flag before he got silenced via Viagra? . No wonder Vasco da Gama Ole Intimama is joining TNA.