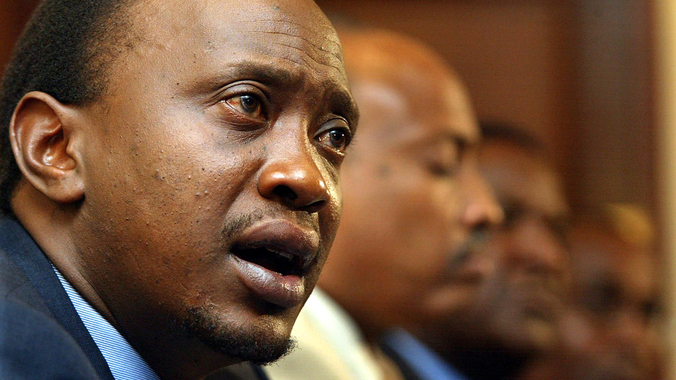 That the failed Uhuru government is afraid of an Arab style of a revolution is not in doubt. The 2 failed leaders- Uhuru and Ruto are evidently in slumber land after luckily managing to be declared winners of the flawed and massively rigged 2013 presidential elections.

Yes Kenyans are increasingly getting sick of the arrogance of Kikuyu supremacists like Moses Kuria who even had the audacity to say that what they did in 2013 was â€œa hat trickâ€. Yes hat trick is abracadabra!

Uhuru has a lot to be afraid of an uprising because even though he may have a legal basis in the Mutunga ruling to serve as President, his legitimacy continues to be questionable in the public court of opinion and numerous scholarly and media reports. Whether itâ€™s Jicho Pevu or studies of exit polls by Harvard and University of California at San Diego, holes continue to be punched into Uhuruâ€™s legitimacy.

And so as a mammoth crowd gathers to witness Babaâ€™s return, Kenyans are truly clutching on straws as Jubilee steamrolls its evil agenda down the Kenyan throats. And Kenyans will for sure turn up in large numbers to listen to their only hope for a better tomorrow. The only leader who if he were president, â€œwonâ€™t tell them to bend over like the Jubilee leadership is doing over and over and over againâ€.

And so Uhuru is scared like â€œshitâ€. Jubilee is scared that Raila is resurgent as Rashid Wanjala predicted in Kenya Today at the beginning of this year. Yet not a single pledge has been fulfilled. Zero. Itâ€™s becoming clear each day that Uhuru and Ruto had no laid down agenda other than fleecing Kenyans through Anglo-leasing MPESA payments.
Uhuru knows that thereâ€™s no justification whatsoever as to why a revolution should not happen.

The wretched of the earth are disillusioned as inflation continues to rise, hotels workers continue to be laid down because tourists are deserting Kenya to other destination, the West has tightened purse strings, kids are yet to see laptops-

And so the government had shivers down its spine when Cord requested to use the KICC for Babaâ€™s homecoming. The reason is because KICC, Kimaiyoâ€™s feared that the public may even force Raila to take charge of Harambee house and take charge of the government as the duly elected President Of Kenya, of which he is by the way. The public may also hide in buildings in case the government forces were to use live ammunition and teargas against peaceful demonstrators.

Uhuru Park is strategic for the ruthless Jubilee police state because, its isolated, and they know that if a bomb were to explode, it wouldnâ€™t bring down any major building. And also they are able to restrict the Luo masses attending to the confines of Uhuru Park as they have only 4 openings that are sealed, and they can clobber CORD supporters like donkeys within those confines.

The Jubilee governmentâ€™s evil security plan also may involve unleashing dogs against wananchi. And like they have done before, allow imminent terrorist threats to squeak through. The abandoned bag that was reported in the media was a Kimaiyo ploy meant to prepare Kenyans psychologically for a stage-managed grenade attack to give them an excuse to suspend the provisions of the freedoms of assembly as enshrined in the constitution and declare a state of emergency in the disguise of combating terrorist threats. Cordâ€™s intended nationwide rallies may also be banned.

It has also been licensed as a public gathering rather than a political rally to allow a leeway for the government to disperse the crowd in case the Cord honchos utter political statements. A public gathering is supposed to be like a bash or a crusade where you just talk about the weather and stuff.

No politics. And so that leaves the government a legal loophole to disperse the crowd in case the rally turns so huge and Uhuru-bashing for Jubilee to bear. The initial plan was to make Cord insist so that if thereâ€™s an explosion they would just say we told you.

The #RailaReturns will be a #motherofallrallies where #Kenyans from all walks of life will update him in the forum that has now been dubbed on twitter as #BabaWhileYouWereAway. By the end of today, it will become clear to all that #Raila is the new Sheriff in town, a reloaded, re-energized, and more educated leader after attending a whole semester under the tutelage of some of the worldâ€™s best Professors who teach at Harvard and MIT- including the world revered Jeffrey Sachs of the Earth Institute Of Columbia and Joseph Nye a.k.a The Science Guy. #LongLiveAgwambo. #GodBlessJakom. The Pope of the Baba Religion. Kalonzo his Peter. This is truly a Raila Second Coming. A day like no other. Sikukuu. A day to eat chapo.

Mwikali is a security analyst based in Washington, Seattle- USA