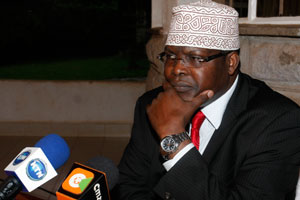 [wpsocialite]
Something happened this week which interests me so much to being tickled. Someone opened up and glared through the lenses of the camera to pour venoms on the character and personality of one of the presidential candidate striking jarring echoes from the outburst of one senior counsel James Orengo regarding the moribund IEBC.

Yes Isaac Hassan,the gold medal for linguistic and logical incoherence winner according to Miguna Miguna, filed his response regarding the petition challenging the son of Jomo from assuming the presidency.

His defense revolved around the issue of Raila not conceding defeat in any election tracing the behavior from 1997 General Election. He triggered this with a murderous rage challenging the Supreme Court to ignore the petition since according to him it lacked ground meriting presidential electoral malpractice.

I do not wish to give his assertions currency beyond their nuisance logical and legal proof but rather dissect the circumstances leading to filling the petition of which was born immediately the â€œdoctored election resultsâ€ were announced.
Anybody talking about elections held during Moiâ€™s era as being free and fair and did not merit being contested is seriously abrogating our intellectual recollection of an era characterized by wobbly leadership perpetuated with feudal state under one monolith that ensured that leadership did no evolve.

In 2002, Raila who never concedes defeat according to the incoherent IEBC boss, bolt from the blue and surprised many with his KIBAKI TOSHA declaration.

In 2007, the circumstances that graced the declaration of Kibaki as the third President of this Republic were disputed by even the International observers including the ECK Chairman who later confessed to have not known who won fairly.

So Mr. Chairman, did you expect Raila to concede defeats in an election where even the Chairman of the body mandated to oversee the process is lost as to who is actually the winner?
You only opt for character assassination and terrorize the other side into submission through emotional loaded verbatim when you are in an undercover mission.

To hem and haw on appeals and other imprecise legalisms only affirms the wretched foundation of philosophy that drives people like Isaak Hassan who have been mandated with the pertinent constitutional obligations that draw the life and death line of our constitution.

To me, Hassanâ€™s response should be best treated as a mediocre era of aberration to shift attention to real issues which require response like what led to the collapse of electronic voter tallying. Under whose instructions was the number of rejected votes being multiplied at the national tallying center?