Miguna Miguna’s book, Peeling Back the Mask, has triggered the peeling back of many more masks than it intended ~ including his own which was peeled back rather impressively by Sarah Elderkin.

In the â€˜Peeling back frenzyâ€™, several commentators â€“ on Radio, TV and Print Media – have been trying to outdo each other in condemning the â€˜political intoleranceâ€™ displayed by the residents of Nyando when they demonstrated at Ahero, burning Mr. Migunaâ€™s effigy and burying a coffin containing â€˜his remainsâ€™.

I hold a contrary opinion to theirs because I believe in the rule of law, fair play and in the new constitution, all of which tell me that the residents of Nyando should and must be allowed the unfettered enjoyment of their constitutionally guaranteed right to express their opinion on the contents of Mr. Migunaâ€™s book. None of the actions of the people of Ahero that day falls on the wrong side of the law. From the mock funeral, to the burning of the effigy, to burying of the coffin and waving of placards, all the actions of Jonyando that day were well within the law.

What is not within the law however â€“ if it really happened as claimed by Mr. Migunaâ€™s brother â€“ are threats that may have been directed at the family. However, I still find fault in the manner that he and the Police handled this too. Last I checked, the procedure followed when one is at the receiving end of criminal threats, was to report the matter to the nearest Police Station, at which Station the complainant would record a Statement providing the names, phone numbers and, or location of the offender or offenders. This would be followed by investigation, arrest and charging of the offenders. In Migunaâ€™s brotherâ€™s case, none of these took place. Instead, the press were quickly called in and provided with fodder to further a predetermined agenda. 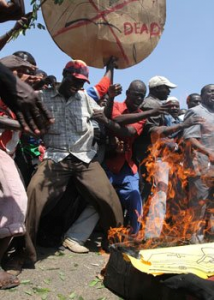 I have a few questions for those who consider the people of Nyando intolerant and for the Kenya Police. If Miguna Miguna has a right to express an opinion on Raila Odinga, donâ€™t the people of Nyando have a right to express an opinion on Miguna Miguna? Is the freedom of expression a preserve for the rich and mighty? Why did the Police send tens of cops in full riot gear to break up a peaceful demonstration by Kenyan citizens whose only crime was to register their opinion on a matter of intense national debate? Why were they stopped from getting anywhere near Mr. Migunaâ€™s gate and yet two days later they sat back and happily watched as a mob delivered a sack of Maize at the office of the Prime Minister? Had the grainy deliveryâ€™s destination been the Steps of Harambee House, would they have been let to litter the steps of Kenyaâ€™s other 50% seat of power?

They can pretend away these contradictions and inconsistencies because of the desperate need to paint one side of the political divide in the worst possible colours, but thankfully Kenyans are much more intelligent than they know.

Mutuma Mathiu, a columnist in The Daily Nation in his Friday piece even went to the extent of likening the â€˜intoleranceâ€™ in Ahero to the Moi era antics of hiring crowds to demonstrate and harass the regimeâ€™s critics. To depict that the residents of Ahero are incapable of having an opinion to express unless they are hired is just bigotry.

Mr. Imathiu conveniently assumes that the residents of Nyando who participated in the demo had no clue on the contents of a book , not withstanding that the book had been serialized in his own paper (the Nation) and was widely available online free of charge smacks prejudice and disrespect.

Mr Onyikwa Nyakundi is an analyst and satirist of social and political issues. He can be reached by mail at; onyinkwaa@yahoo.com.Â