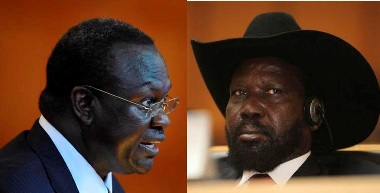 The Republic of South Sudan is in serious crisis. There are people who called it political, some called it ethnic, and other groups even described the whole situation asstupid war that could undo the future of South Sudan. At least 1000 people have already died as a result of the conflict and most of the dead are believed to be from Nuer tribe allegedly massacred by presidential guards who are from Kiirâ€™s tribe, the Dinka.

The so called IGADâ€™s leaders or the East African leaders, who recently went to Nairobi, Kenya, and announced their support to Kiirâ€™s administration have clearly demonstrated that they have no clue what they are about to get themselves into.

Here in the Republic of South Sudan, the burning question in the minds of many is, who could expect IGADâ€™s leaders to criticise one of their own? Tribal conflicts in South Sudan have been going on for many decades, perhaps centuries. This tribal rivalry has been mainly between the two largest tribes, the Nuer and the Dinka.

It is true that the conflict started as political but the killings of innocent Nuer in Juba convoluted the entire problem, simply because the president is from Dinka and the rebel leader is from the Nuer. This is a fact!! The International Community plus neighbouring East African Leaders must be cautious in dealing with such a worrisome situation.

After IGADâ€™s leaders declared their support to the South Sudanese president in Nairobi, the reactions of the people of South Sudan have been largely interpreted into two agonising sides:

Secondly, Macharâ€™s supporters believe that the blockâ€™s statement is too sightless and failed to address questions like, who is responsible for killing Nuer in Juba and why IGADâ€™s leaders did not address the root cause of the crisis.

The International Community and IGAD should:

â€¢ Immediately consult with South Sudanese experts; I mean people who studied tribal conflicts around the world including South Sudan or those who have studied the cultures of Dinka and the Nuer. From there, they can learn some tricks that can help them in dealing with the peace process.

â€¢ Properly investigate reasons as to why Riek Machar rebelled, this must include people who were arrested by the government.

â€¢ Evidences of Kiirâ€™s government should not be used by foreign countries as facts; there must be independently verified evidences as to what really happened and why. As a South Sudanese, I know even a simple disagreement between a Dinka and a Nuer can easily be twisted into tribal war especially in the middle of a crisis like this.

Any exterior authority that shows its support to one of the competing tribes will be immediately viewed by the opposing tribe as a supporter of its rival tribe and consequently, the foreigner will be treated as such. I am sure the situation would have been easy today if Kiirâ€™s Warrap militias did not killed innocent Nuers in Juba.

Let us pray for peace, our nation needs nothing but peace, let peace prevails over war. We do not want our children to grow up in war. President kiir and Machar must also accept peace because peace is the only best solution for our future.