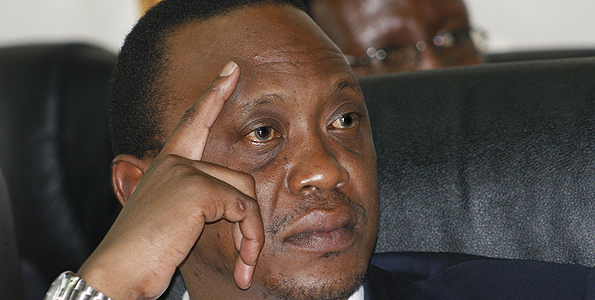 Pampered prince. Probably his father whispered to his ears that, â€œyou must make sure you become a president if you are really my sonâ€. For those who watched the son of Jomo campaign, you will agree with me that he was glamorous, enthusiastic and energetic. He hurled all manner of promises to his pregnant and expectant but ignorant crowd.

There are those who blundered and bought his side of theory while many chose to be on the right side of history. He exploited the tyranny of numbers crap, connived with IEBC and colluded with the Judiciary to force his way to power. Together with his â€œbrother in Christâ€ oh! Sorry â€œbrother in ICCâ€ â€“William Ruto â€“they got a rare lifetime opportunity to form government.

Since assuming power, the two indictees have literally faulted on each and every pledge they â€œcoughedâ€ during the campaign period. This reminds me of this quote by Anais Nin, â€œWhen we blindly adopt a religion, political system, literary dogma, we become automatons. We cease to grow.â€ This is the state in which we find ourselves. Shameful!!

Uhuru rose to power at a time when the country was and is still divided along tribal lines; thanks
to Mwai Kibaki. By the way, does anybody know the whereabouts of this bald-headed man? This is
the curse that is the Kenyaâ€™s former presidents. They have not a shred of legacy to boast of
after leaving power. Selfishness, corruption and dictatorship rubber stamps their style of leadership. Jomo Kenyatta was a pathetic tyrant; Moi followed into his footsteps and perfected the art of stealing. Kibaki broke the record of his predecessors.

Uhuru is blessed to be deputized by a very dangerous chameleon – Ruto. William is a crybaby who
will always wet the presidential lectern with floods of tears â€“ God forbid. I heard people describe
these tears as crocodileâ€™s!! Since his days in the village, William Ruto has evolved from a chicken
seller, to a CU choirmaster in his hey days in the University to KANU military youth wing ring leader to Ruto the crying deputy president. Say born again and again and again. On connecting the dots, you find out the metamorphosis of a conman.

Niccolo Machiavelli said â€œthe first method for estimating the intelligence of a ruler is to look at
the men he has around him.â€ I totally agree with this statement. Uhuru is surrounded by men and
women of questionable characters. He has decided to recycle and reuse political power brokers who have been in the system since time immemorial.

The promise of giving the youth a fair share of government appointments has been thrown into the dustbin. The same old faces and the callous decisions that does not smell of any intellectual input for
example, the careless appointment of Abdouba Dida to chair CDF committee and Clifford
Waititu to the Athi Water services board has made one of his trusted ally â€“ Mutahi Ngunyi – to
publicly disown him. However, I disagree with Ngunyi when he plays political theatrics by saying
that he only supports Uhuru because of his age. This man insanity!

The tribal dimension which has characterized his appointments portrays him as a very careless
and unreasonable leader. This tells you that he is just another failed president. Any hope for a
better future by Kenyans should be harbored for now. It seems the son of Jomo has eaten from
the same pot his predecessors ate from. In his speech, he always seem like he is fighting an imaginary enemy. Iddi Amin was perfect in such behaviors.

The standard gauge railway will be another cash cow that will dwarf Goldenberg, land grabbing and anglo-leasing combined. It is the same trend â€“ our time to eat. Personally I never and will never have any greater hopes for any positive change. The writings are on the wall. We are in the cycle that was started by Mzee and now the digital boy is on the wheel.

But wait, what do you expect if intellectual dwarfs and hate blogger like Denis Itumbi are the
ones manning state house? Of course blunder after blunder.
Even though they painstakingly try to give life to the laptop project, I suspect it is just another scheme for him and his cohorts to â€œget rich quickâ€.

It is therefore clear that Uhuruâ€™s rulership will exactly follow the, trend and â€œnyayoâ€ of the past
autocratic regimes. Lies, corruption, impunity, tribalism, nepotism and the list continue. It is up to Kenyans, those who voted wisely, those who were duped and those who aided and abated the criminal act of forcing an incompetent regime into our throats, to think again. In the meantime, Uhuru is just another clueless president. I rest my case.

(Jim Bonnie is a prolific writer on
socio-political issues affecting
Kenya and the world and a
political strategist.)