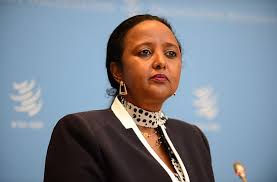 This week is longer than normal for Cabinet Secretary for Foreign Affairs Amina Mohammed, mid week she was forced to issue a statement that the presidentâ€™s much publicized trip to the Far East (Japan, China and Russia) was a hoax. Around that time, the president was in the ‘near west’; I mean Uganda.

In a show of her digital might, Ms Mohammed sent a tweet on Wednesday confirming an end to the little matter as regards one Anthony Chinedu and the 11 Kenyans detained in Lagos

â€œGreetings, good news for Kenya as all the Kenyans held up in Nigeria are on their way back home,â€ read a tweet by Ms Mohammed.

Government spokesman Muthui Kariuki joined the fray in a hurriedly convened press conference to proclaim the good news and how the Jubilee government had worked ’round the clock’ to ensure the matter was put to rest!

Well, the 11 officials showed up at some airport in Lagos only to be told they were NOT yet cleared to fly to Nairobi putting to shame the MFA, and splashing another rotten diplomatic egg on the red eyes of President Uhuru Muigai Kenyatta already arguably the most incompetent president in his early fifties in the whole world!

â€œWe are still doing the paperwork for the plane and very soon it will be sorted out. We shall have something to tell you within 24 hours,â€

Uhuru Kenyatta’s cabinet is many things to many Kenyans. But a great many have begun to agree the team is as ‘useful’ as Audry Mbugua’s manhood.

…..and the fantasy continues as we wait for the yet another arrival date tomorrow Friday!