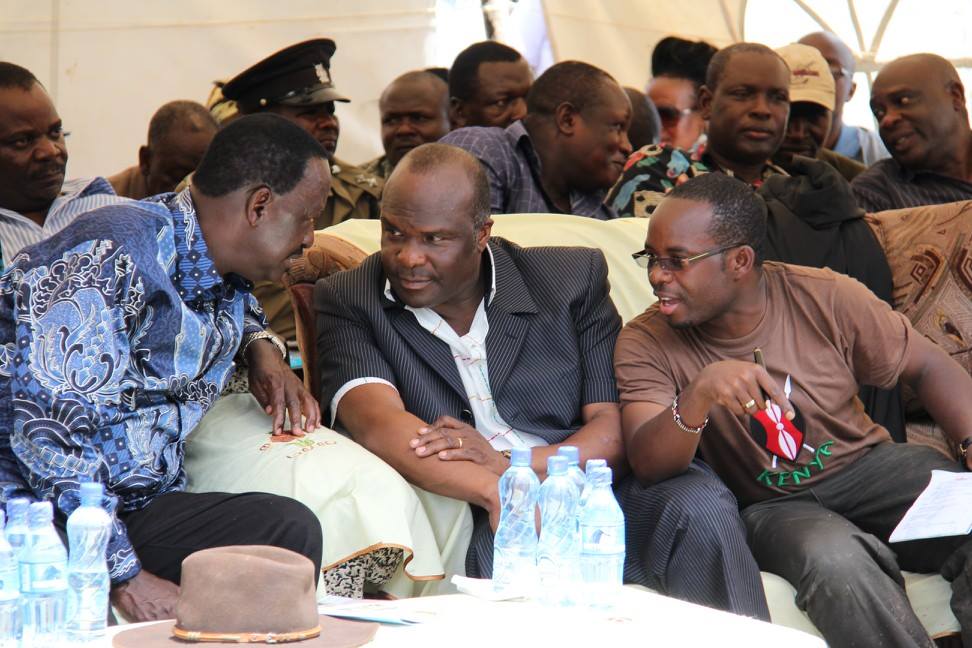 Photo: Jakakimba at his home with Prime Minister Raila Odinga and businessman Sammy Wakiaga among others at the burial of his father in Kakimba, Mfangano island, Mbita.
By Silas Jakakimba
Good Folks of and from Our Lakeside County of Homa-Bay, in a tribute directly addressed to the Senator 2 days after his sudden demise, I told Gerald that his spirit knows so well that behind, he has left an utterly devastated lot. A broken people. Unending tears. From our mothers… Our uncles; Homa-Bay constituents and admirers nationally.

Brokenness, still and will abound for eons. I told Wuod Dala that his sudden recall, did scare us beyond what scripts of condolences could and can carry.

In closing, I did tell him that assuredly, even as we mourn, the spirit that informed his drive and unwavering commitment to realising a JUST society in Kenya, roars on.

Be all that as it may, on July 23rd, 2014, @8.48pm, on this medium, still on my wall, I did solemnly address The People of Homa-Bay County vide a picture post (below, on comment thread) with a statement, and I quote, “Jo Homa-Bay I’m now available for ANY responsibility. Wuod Ajoy Ny’Abala awacho kamuol kik chiela gi kite…”.

In a bid to continue with The (Reforms, Legislative, Change, Good Governance & Development) Legacies left behind by Senator Kajwang’, I do hereby present myslef to The Good Peoplsles of The Promised County of Homa-Bay for election as your next Senator. I wish to make it known that we are ready to embrace the Challenge and ensure that this par excellence Legacy left behind by Gerald, both at County and National Assignement Levels, lives.

On the same note, I wish to point out that had Gerald been here today, he’d have addressed the Nation and The Presidency on (in)security.

Folks, the most cardinal responsibility of a legitimate Government is, to PROTECT and guarantee SECURITY and SAFETY to its Peoples and their Property.

As I’ve always done before, I want to make it particularly clear to the Political Captains of the Jubilee administration that We The People have today flashed the Red Card and put them on notice. If anyone of them wallows in the dreamland of assuming that Senator Kajwang’s absence is an automatic underbelly for CORD’s and The Change Movement’s unrelenting push and clamour for a more SECURE, Equitable, Democratic and Prosperous Nation in the name of The Republic of Kenya, be you warned.

On my own behalf and on behalf of The People of Homa-Bay County, We condemn in the STRONGEST terms possible, this administration’s juvenile refocus on leadership by PR stunts as lives of Kenyans continue being lost in horror massacres including but not limited to â€ª#â€ŽMandera1â€¬, last night in Wajir (36pax) and earlier this morning in Mandera where tens of lives were brutally lost.

Our National Security and Intelligence Infrastructure have never been so weak.

Separately, the past days have seen various sectoral and individual calls from Homa-Bay County on us to heed the call and take a Leap of Faith on this most important challenge of ensuring Homa-Bay’s place at the Senate in contributing to better governance and strengthening of Devolution, stands secure.

Today, as I’ve said up there, I have answered The Call by presenting myself for your electoral endorsement because, together as a People – In God, Do We Trust that Yes, We Can.

We look forward to a partnership-based, bottom-up, consultative and citizen-participatory leadership as we pull all our efforts TOGETHER, and in a homogeneous liaison with the County Government and its Leadership – to make Homa-Bay The County of Choice where all can live dignified lives.

Asante to all and we remain humbled by your support and goodwill.

May God Bless Homa-Bay County and The Republic of Kenya.