HYPOCRISY: As we remember baby Osinya with a terrorist bullet lodged in his head; let’s also remember this unknown, unnamed, baby. This baby, unlike Osinya, will never occupy the front page of DAILY NATION and The Standard Media Group newspapers. His/her story is gnashed in legal jargon and political posturing. Those who killed her/his mother are innocent until proven guilty. At least, we now know they will never be. He/she is growing up without both mother and father, killed not by bullet but hacked at closest range by the mungiki in Naivasha.

What of the many whose parents were burnt in their homes in Molo, Burnt Forest et el?

Even the churches you worship in aren’t pious enough to tell his/her story. Been thinking about him of late. Been wondering when he shall see this pic and hear his/her story. This baby…this unnamed baby…this crying baby. . .he/she too deserves a mention. 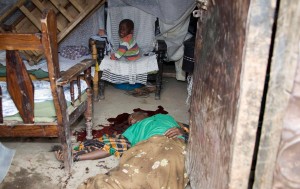