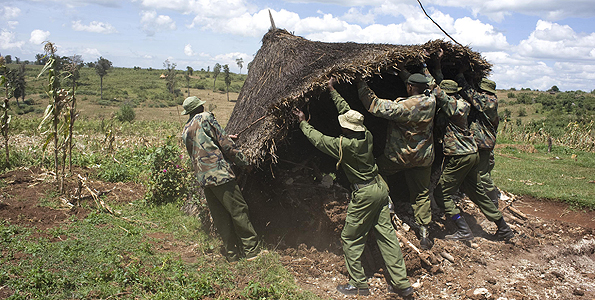 Kenya defies its own courts: torching homes and forcefully evicting the Sengwer from their ancestral lands, threatening their cultural survival

The Kenyan government has sent Kenya Forest Service (KFS) guards, with police support, to Embobut Forest in the Cherangany Hills to forcibly and illegally evict thousands of Sengwer indigenous people from their ancestral forest lands and burn their homes and belongings to the ground.

By carrying out these evictions and burnings, the Kenyan government is completely ignoring the court orders, the Constitution, and its international legal commitments. It is acting as though it is above the law.

In March 2013 Eldoret High Court issued an interim injunction which forbids the Kenya Forest Service forest guards and the police from carrying out evictions and burnings of Sengwer homes. This injunction was renewed in November 2013. On 18 January 2014, the Judge at Eldoret High Court issued further orders requiring that the police arrest anyone breaching the injunction. However, as the police are providing support to the KFS guards carrying out the evictions, they themselves are breaching the injunction.

However, despite the illegality of these evictions, the Kenya Forest Service, with police support, are continuing to burn Sengwer homes and evict Sengwer communities in the Embobut area of the Cherangany Hills, and are now planning to extend evictions to all other areas in the Cherangany Hills forest complex to include Kapolet and Lelan/Kamolokon. This means the removal of the entire population of Sengwer indigenous people living in the Cherangany Hills from their ancestral lands â€“ which is tens of thousands of people. Forceful eviction and displacement of Sengwer peoples from these areas will not only violate the 2010 Kenyan Constitution and International Human Rights law, but will threaten the very survival of their way of life.

For many years the Kenyan Government has been trying to remove the Sengwer from their ancestral lands by burning their homes and food stores. They have done this in the name of a fortress conservation approach which seeks to remove local people from their lands, and which makes the environmental situation worse while creating a human rights crisis.

The Kenyan government describe the Sengwer as â€˜squattersâ€™; this couldnâ€™t be further from the truth. The Sengwer have their rights to their ancestral forest lands enshrined in the Constitution and international law. Despite this, the Kenya government takes a colonial approach to forest conservation: evicting those who have protected their forests for centuries. It replaces them with the Kenya Forest Service (KFS) whose track record at nearby Mount Elgon demonstrates that when the KFS is in control then indigenous forest is fast destroyed, as profit making plantations and agriculture replace the biodiversity of the indigenous forest. This logic is amplified many times over by the prospect of securing funding through Reducing Emissions from Deforestation and Forest Degradation (REDD) for KFS-controlled projects which may aim to benefit from first devastating indigenous forests and then promising to reforest using fast growing plantation species.

In 2007 the Kenya Forest Service began receiving funding from the World Bank for a Natural Resource Management Project (NRMP) and every year since then (apart from 2012) Sengwer homes have been being burnt by KFS guards in a process of harassment and intimidation that completely disregards the Bankâ€™s safeguard policies, as well as disregarding the Bankâ€™s own Indigenous Peoples Plan (IPP) that was drawn up prior to the project. The IPP highlighted the fact that unless the project secured Sengwer rights to their land, then far from improving livelihoods it would â€“ as has been demonstrated â€“ devastate communities.

Over this period the Sengwer were offered land elsewhere but each time refused to move from their ancestral lands.

In a change of tactic, the new President came to Embobut in November 2013 and offered 400,000 Kenyan Shillings to a list of 2,784 â€˜beneficiariesâ€™. These included some of the indigenous Sengwer, as well as internally displaced people (IDPs) who are mostly landslide victims, and those who have land elsewhere but have seen Sengwer land as available to cultivate since the Sengwerâ€™s right to their land is not recognised.

400,000 shillings may be a lot of money for an IDP or for someone who has simply come to benefit from cultivation. However, for the Sengwer, who have no land elsewhere, eviction means being torn from their ancestral lands and the end of their community, so 400,000 is nothing and will soon disappear.

The list of â€˜beneficiariesâ€™ has never been made public, probably because so many on the list are not residents of Embobut. But more importantly, there was no consultation, and no agreement from the Sengwer. Most Sengwer residents of Embobut are not on the list, and for them, and even for those Sengwer who had money placed in bank accounts that were newly created for them for this purpose by the government, none had agreed to giving up their land for this temporary amount of money that requires families to search for an acre of two elsewhere far from their own lands and far from each other.

As one Sengwer community member emphasises:

“We were not consulted. I heard about it from the chief in October in the market at Tangul. He said names are being listed so I was told to write my name, so I wrote my name and my name did not appear in the list. I do not want the money, I want to stay up here in Embobut because where you are born and where you go outside there it is not the same.”

Putting money into some peoplesâ€™ accounts was intended to distract the public and the communities themselves from addressing the real issues â€“ it has misled the general public in Kenya to think the money was a fair exchange which the Sengwer have agreed to. In fact they agreed to no such thing, and according to international treaties to which Kenya is a party, the Sengwer should have been consulted and then accepted or rejected the proposal.

Instead, in their forest glades high in the Cherangany Hills, their homes have been being torched day after day for the last ten days, and today the notorious Administrative Police have moved in to forcibly evict those who remain. The same police who have been issued with a specific Court order requiring that they arrest anyone carrying out the evictions. If a countryâ€™s Government and police wonâ€™t obey the law, then whom do you turn to?

Meanwhile Micah Kigen an advisor to former Prime Minister minister blamed the current Marakwet leadership and called upon the Uhuru regime to be open with community.

“I condemn elgeyo marakwet leadership for allowing such barbaric acts in the jubilee year, am calling upon the president and his diputy to be straight forward and deal with kenyans equally,by compensating other kenyans five acres and the government build a house on top and others are given cash of 400,000 which can not even buy one acre is by itself a big joke from the government.am urging the people being evected to stay put and demand equal treatment” said Kigen.