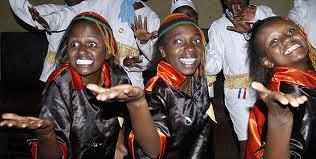 BANNED IN A DEMOCRACY: Shackles of Doom Synopsis. Shackles of doom is about a community in search of black gold in a foreign land but later on cases of nepotism and tribalism ignites a conflict.

Shackles of Doom is a play that depicts the production of a film in Kanas, an impoverished country with large oil reserves that are yet to be exploited. The people of Kanas refer to themselves as the True Kanas and they languish in poverty unaware of the riches that flow in the ground beneath their feet.

Lopush who is a True Kana is in search of a bride and his prayers are answered when a delegation from a neighboring country arrives in Kana and offers him a beautiful lady, Wamaitha, to be his wife. The delegation asks for the True Kanaâ€™s land as bride price and promises to build them an oil refinery to foster the relationship between the two countries. What Lopush does not know is that his bride is 3 weeks pregnant and Kimani, who claims to be her guardian, is the father.

The oil refinery is constructed and during the hiring process, none of the the True Kanas clinch administrative positions. Kimani is appointed the CEO of the refinery and the highest ranked True Kana in the refinery is a security guard.

On the eve of Lopush and Wamaithaâ€™s wedding, Kimani has an order of 600 barrels of oil and orders all the factory employees to work the day and night shifts to fulfill the order. Lopush is not spared either and is forced to work as the security guard.

The employees are hard at work when Kimani sneaks away to Lopushâ€™s house and tries to talk Wamaitha into having sex with him before she is married off and an argument ensues between the two.

Lopush defies Kimaniâ€™s orders and leaves the refinery before dawn to prepare for his wedding and walks in on Kimani and Wamaitha.

Wamaitha is at pains to prove that she did not fornicate with Kimani. A crowd gathers and just as they were about to descend on Kimani, news of a fire at the oil refinery reaches them. Lopush had left with the keys to the installation and he is needed to aid in the evacuation process. The villagers rush to scene of the accident only to find that the whole refinery and its occupants had burned to the ground. A â€œtechnical glitchâ€ is blamed for the horrific accident.

â€œCUTâ€ yells the film director, signifying the end of the shooting. A cast member points out that the film has no credible resolution. Her suggestion is an ending where all communities at peace, there is harmony, truth, justice and equitable distribution of resources. The cameras are still rolling as the cast member makes her plea but in full glare of the camera the director declares his resolution was credible!