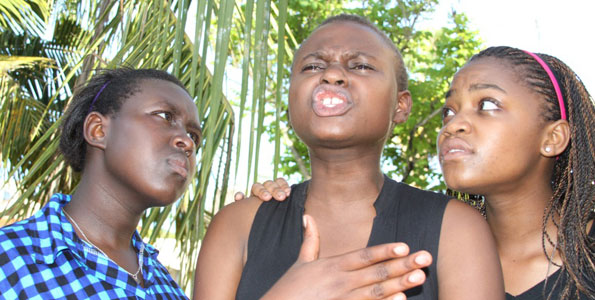 The government has banned the live coverage of the controversial play Shackles of Doom, the Education ministry officials and the Education PS on Sunday vetoed attempts by the media houses to cover the play live from Aga Khan High School Mombasa 4pm.

Leading media houses had their outside broadcasting equipments ready at Aga Khan high school when the message from the government was delivered despite an earlier permission given by the national Executive Committee that allowed TV stations to do live transmission of the play.

A synopsis of a scene in this play is thus: â€œThere is a land called Kanas whose inhabitants are refered to as True Kanas. The land has oil though the poverty-stricken True Kanas are ignorant about it. Soon, outsiders arrive offering a pretty girl called Wamaitha (already three weeks pregnant with Kimaniâ€™s child) in a well choreographed marriage to a young man called Lopush, a â€œKanaâ€ in exchange of land. Her industrious community constructs the Mafuta Oil Refinery where employment is prejudiced and based on nepotism; soon the True Kanas begin to agitate for equal opportunities which lead to (only) one of their own given a watchman post in the company. Due to nepotism and unequal resource distribution, schisms develop between the two communities which violently clash leading to death.â€

To adherents of literature and drama, these hypocritical interferences are not new. In the past, they used to take a moral viewpoint, with churches and cultural purists breathing fire on literary texts which presumably did not conform to popular myths, be they religious or traditional. A recent debate about the banning of Witi Ihimaeraâ€™s The Whale Rider as a set text in secondary schools is a case in point.

The silencing of dissenting voices, the creation of plastic sensitivities on public discourses around issues of ethnicity and land, the symbolism of the political alliances on political conversations, where one tribe is always at the top while others are relegated below a case in pointÂ  the controversial nominations of special seats into the Nakuru county assembly (https://www.kenya-today.com/politics/nakuru-county-special-seats)

If the use of the names â€œWamaithaâ€ and â€œKimaniâ€ contributed to the banning, presumably to symbolize the greediness of the kikuyu tribe, who stands accused? Is it not true a few powerful people from that tribe are known to have such tendencies? Is drama not supposed to create an illusion of reality? If the reality is ugly (as it is), should we deny it? Why the double standards?

Looking at the local TV programmes in both Citizen TV and KBC; shouldnâ€™t others also accuse the one tribe of misrepresentation? Look at Omosh in Tahidi High or the career watchman (a luhya) in Papa Shirandula. . .look at Vioja Mahakamani?

In all these plays, the depiction of others are only peripheral, only characters from one tribe are seen as model judges, model teachers (Mr Kinuthia) and perfect urbane grand-mothers! Ondiek Nyuka Akuota is the worst depiction of a Luo and you wonder, where are the thieves, drunkards and tribalists from this other tribe? When you finish watching these plays and the cast list begin scrolling on your screens, thatâ€™s when you realize all those producers, editors, script-writers, cameramen, directors, managers et cetra are either a Mwangi, Njoroge, Maina, Thuku, Kamau, Waithera, Wambui etc! Why has the other communities not raised the ethnic bar and sent a protest a note to Mzalendo Kibunjia?