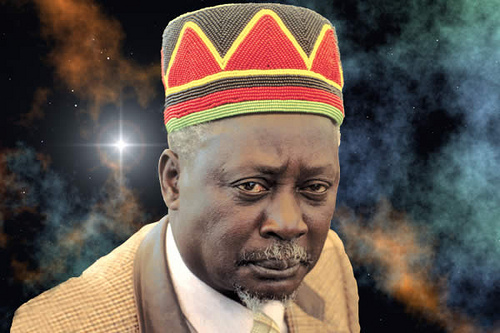 On this date in 1994, Jaramogi Oginga Odinga passed on.

John Kamau, a writer with Nation newspaper recently penned a historical feature which had all the hallmarks of a misleading story.

Ordinarily,I would not have bothered to read it, because, disdainfully, I rarely read some columnists who often write with their ethnic narrow-mindedness in Kenya’s so called ‘National Newpapers’.

Increasingly, there have been attempts at revising Kenya’s post-independence history, especially by those who want the current ‘digital nightmare’ to fit within a historical analogue context.

Nowhere is this craze so pervasive as among a certain clique of journalists and editors writing in some of Kenya’s major ‘national’ newspapers columns. Kamau, a senior historical scribe recently attempted â€˜rewriteâ€™ one of the most foresighted political thinking of Jaramogi Oginga Odinga, the doyen of opposition politics in Kenya.

The article titled â€œIntrigues of Jomoâ€™s and Jaramogiâ€™s secret joint account in Londonâ€œ, captured my attention for quite the same reasons it may have captured yours: it would be indeed intriguing!

Whatever the motivation for Kamau was, I concluded he is a very shallow journalist, annoyingly myopic in his view of the events which shaped the capitalist-communist politics of Kenya in the immediate years after independence, or, as usual, he was ‘tabloidazing’ history.

Two questions stuck in mind after reading the piece: One, was Odinga a â€˜socialist sympathiserâ€™? Two, what was the Lumumba institute for?

“To Kenyatta, Lumumba Institute, named after Congoâ€™s Prime Minister who was assassinated by the CIA, was a dream come true for the ruling party Kanu. The party, he thought, would now have a base to train its members, activists and youth wingers. He said as much at the opening ceremony. But Jaramogi and his socialist allies had other ideas. It was a plan to take over Kanu”.

So what was Jaramogiâ€™s â€˜dreamâ€™, if any, of the role of this institute? Why was it necessary to have this institute? Because Kamauâ€™s logic, if there is any, only seems to be inspired by the egregiously simplistic but usual mainstream Kikuyu writerâ€™s desire of making the older Kenyatta â€˜look goodâ€™ and the younger one â€˜feel happyâ€™, he veers off completely on this topic.

To him, the institute was only Jomoâ€™s dream of having a â€˜baseâ€™ to train â€œKANU members, activists and youth wingersâ€.

In my view, Kamau suffers from the kind of contemporary intellectual malaise which interprets Kenyaâ€™s history as a constant conflict between Jaramogi, and his scion Raila, and Jomo Kenyatta, and his offspring, Uhuru. In between is the ethnic schism of two very distant tribes-the Luo and the Kikuyu. Sadly, driven by his â€˜kikuyunessâ€™, he cannot afford to wallow in the realm of critical exegesis of Kenyaâ€™s history in the period just after independence, despite the advantages bequeathed on him by the passage of time.

Tom Mboya, a capitalist creature and fierce defender of western interests, told the legislature that he would do everything to guarantee â€˜security for public and private ventures in Kenyaâ€™.

Masinde Muliro, who would later team up with Odinga to form FORD, amended this motion, where he called communism â€˜evil and godlessâ€™ propaganda.

During the same debate, Moi, who called himself a â€˜Christian democratâ€™, insisted that communism had to be defeated while Gikonyo Kiano, boasting of his extensive study of communist literature, Marxist-Leninism and Stalinism, claimed that â€œin addition to being the worst type of imperialism, communism is filled with the doctrine of violent revolution and hence is an unacceptable evilâ€.

At a time when the minister for Internal Security and Defence was one colonial rascal by the name J.W Cussack, who, in the same debate claimed communist support was geared towards “depriving the metropolitan the powers of â€˜supply and raw materialsâ€™, thereby creating unemployment”, Jaramogi, and many others, saw a western ploy that this generation is highly ceased of.

A few did dissent. Though for a short while.

Taita Towett, in his legendary scepticism, raised an alarm that the colonial government, which Mboya, Moi, Masinde and Gikonyo were furthering its interests, was only using imaginary communism threats to commit Kenya to western capitalism. He concluded that the motion was â€˜regrettableâ€™.

Jaramogi, whom the whole motion had been aimed at, while contributing on the floor of the house, told off â€œthose worried about communism to behave in such a manner that they did not by their actions or lack of them help the development of those communist ideas in Kenyaâ€.

It was the golden age of ideological warfare, at a time when politicians used their wherewithal to create societies out of antagonistic political philosophies of the time: Capitalism and communism. It is no more today. But I digress.

The concerns of Jaramogi during this time, and which today, with the hindsight of history and the passage of time, have been tragically proven to be true, was that Kenyaâ€™s economic structure was too capitalistic and too dependent on western multinational companies to be able to long endure.

Unlike Kamau who in even 2013 (when I wrote this rebuttal) still has the audacity to call Jaramogi a â€˜socialist sympathiserâ€™, we see Jaramogi as a man who had imagined the country five decades into the future. Today, the economic interests of the West in Kenya far outweigh the east, yet Jaramogi had pushed for a country whose wealth structure would not be too western dependent nor eastern dominated.

The Lumumba Institute was what it ought to have been until western capitalism unleashed communism propaganda on it.

In a raft of bilateral agreements between Kenya and Russia in early sixties, political party building was recommended as one of the means to institutionalise progressive development and the institute would serve this purpose; that this noble institution would turn out to be one of the most badmouthed institutions of the 1960s had everything to do with Mboya and Kenyatta-two capitalist bourgeoisies- fighting to render Jaramogi, a nationalist per excellence, and his ideas, obsolete!

Jaramogi, to put it more succinctly, may not have been as widely travelled as Kenyatta by the time of independence. Kenyatta had been to the Soviet Union severally and had even lectured Kiswahili over there; but his western leanings, and the frustrations with communism which replaced ‘race with class’ and continued the same evils of discrimination, probably had convinced him to chose the lesser of the two, and he went for capitalism.

I here do not argue that Jaramogi was some flawless politician, no! In fact, his obstinate convictions, and personal stubbornness led to the worst ethnic profiling of his ethnic tribe-the Luo. He â€˜walked outâ€™ at the wrong time, the ripples of which are still being felt till today.

Save for Mboya whose obsession with the West clouded his views of the East as potential â€˜mutual partnersâ€™, most KANU members, especially those like Jaramogi, Towett, Kaggia and others had foreseen western domination of Kenyaâ€™s factors of production as a potential source of conflict in the future. The new country, in their estimation, ought to have been free to enjoy the good that would come from the two worlds.

Throughout his life, Jaramogi advocated for expanding the factors of production to reach as many Kenyans as possible. He saw the domination of these factors, especially land, as a future fodder for political instability in the country. Of course, he was maligned as a communist sympathiser. Jaramogi advocated for Africanization at a time when most Africa Legco members had started admiring the fading rule of the colonialist.

So many leaders, after independence, protected the interest of the departing colonialists than they did to the Africans. Ironically, Africans themselves also ‘admired’ the way of the colonialists.

What is interesting today is the shift of characters re-enacting capitalism-communism politics in Kenya. Today, Raila is “seen” as protecting the interest of the West and Uhuru a darling of the east. In the period after independence, these shifting support bases of the capitalist West and the “capitalist-communism” East was the other round.

Again, was Jaramogi foresighted in rejecting mindless capitalism? In deed he was.

As Jaramogi enjoys his 20th year rest, the challenge today is to preserve and protect his “ideas for the future” from vulture journalists and revisionist scholars.