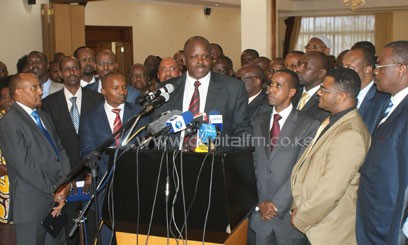 Senators from Cord and Jubilee demonstrated a great spirit which majority of Kenyans have been yearning for from elected leaders. At last, there is a shy of relief for the common man since we now have representatives who share our hurt and tribulations.

It was commendable to see our Senators walk hand-in-hand with their Speaker Ekwe Ethuro, to challenge the President for assenting into law the revenue allocation bill, which will drastically reduce funds allocated for development in the Counties; therefore derailing devolution as provided in the current constitution.

The bi-partisanship show in the Senate is commendable as it puts to rest the controversy on seniority between the Senate and Parliament. Our Senators have conducted themselves with maturity, dignity and decorum which clearly reflect their patriotism and commitment to serve the Kenya people hence, a big contrast with Parliamentarians.

There is no doubt, our Senators can boast of seniority. The Senate is the upper house and therefore senior than Parliament.

Forging a working partnership with County Governors on devolution has made Senators score high marks. Indeed, we can bank on them to protect the common interests of Kenyans if they continue with the current spirit unwaveringly.

Holding rallies throughout the Country by Senators is likely to send shivers to the infantile Jubilee government. This is because; nobody knows how the rallies will impact upon the national psyche.

Secondly, Senators are in one accord as pertains to the petition they lodged at the Supreme Court challenging President Kenyattaâ€™s assent to the Revenue Bill. This may not augur well for the President who seems to give more credence to parliament which, is in a supremacy battle with the Senate, besides being dominated by mistrust and partisanship.

Even though the Senate Majority leader, Kithuri Kindiki, clarified that the petition was merely seeking interpretation and clarity on the law, the fact of the matter is, itâ€™s the President who is being sued for violating the constitution.

Critically, this is not a good start for President Uhuru when Senators and governors from his ruling coalition are against him on the Revenue Bill. Things are likely to get murky especially now that Senators and County governors are in the same page on revenue allocation.

Holding rallies around the Country with the likes of the fiery chairman of the Council of Governors Isaac Ruto is likely to be a big hiccup for the President.

Indeed, devolution was the clarion of Cord during and after the campaigns and it remains the most admirable subject to the Kenyan majority. In fact, the Cord leader, Raila Odinga and the Senate majority leader did appeal to the President not to assent to the contentious bill.

I donâ€™t see how Raila; an opposition leader, with all senators and governors will avoid an opportunity to tell Kenyans about a subject which is closer to his heart.

People-power can be lethal even to powerful governments. The most recent example is the Arab Spring which culminated to the ouster of Ben Ali and Hosni Mubarak of Tunisia and Egypt respectively. Secondly, what happened to Nicolae CeauÅŸescu of Romania in 1989 and Ferdinand Marcos of Philippines in 1986 can happen any global leader.

No government is immune from popular uprising. The challenges of poverty, the wide gap between the haves and have not, youth unemployment, skyrocketing of prices of essential good now that 16% VAT has been introduced on essential commodities will force citizens to go to the extreme.

The Chief executive need to take a neutral line when dealing with legislators. Since he took office, he has appeared to gravitate towards MPs more than Senators and yet MPs have become a disgrace to the nation for their unrealistic demands for salary hikes.

The Senators are angry, Governors are angry; majority of the Kenyan especially the poor are angry and hungry.The political opposition- Cord is literally angry and will not falter to utilize any available chance to score political points when senators and governors will converge in rallies to tell the public about how the President is trying jeopardize devolution. They will be trigger happy at the rallies and this is something that must worry the President.

The President should rescind his assent to the bill in order to save his skin. If not, majority of Kenyans will see him as an enemy of devolution and therefore against the implementation of the constitution.

Giving a deaf ear to the Senators who have demonstrated their willingness and passion for equitable distribution of national resources to benefit the Kenyan majority will not help the President Uhuru Kenya and his Jubilee government.