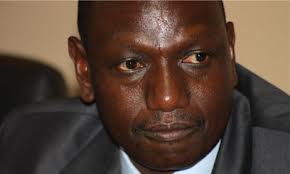 As Ruto heads to the Hague, I wish him all the best as Bensouda makes minced meat out of the Kalenjin tribal leader… oH how time flies fast, and soon his sentencing to life will come and pass…I pray that God will grant Kamwana the wisdom to pick a DP of his choice and without allot of strings attached.

Now after perusing though the evidence as possessed by Bensouda, Kamwana will be acquitted, 80:20 chances, as his DP gets jailed 95:5 chances, and that would be a game changer in Kalenjin politics, and Kenya as a whole. Uhuru’s government will go on without Ruto.

I know Ruto thinks, Kenya will collapse in his absence, Kamwana- once Ruto is jailed will continue to demonstrate that he is the man on the steering wheel, not his co-driver. So who do you suggest replaces Mr. Samoei? Keter, Mrs. Rachel Ruto, Isaac Ruto, Joshua Kuttuny, Gideon Moi, who?

My apprehension and comprehension is that as the ICC cases proceed concurrently, Kenya will fall to a mafia around the Presidency. That’s what I freak.

The duo even running for presidency is the most irresponsible thing that an unpatriotic duo can ever do to their country. Investors will soon begin to flee as the mafia begins to fight among themselves in the event of a vaccum. But- hopefully Mr. Muturi, the Speaker or the ringleader of MPIGs if you like will continue the work of his TNA leader, as the third in line to the throne.

Kenyans need to start scrutinizing the character and track record of Muturi, coz should Uhuru(whose chances of being jailed are infact very slim compared to Ruto’s who is certain of being jailed) end up in life in prison, then Muturi is certain to emerge as president, both in acting capacity as Ruto and Uhuru are on trial, or as the automatic successor to his TNA party leader.