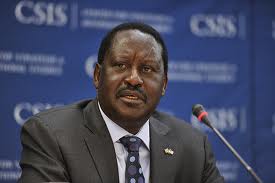 Many of you responded to my brief post on social media regarding Raila Odinga and Devolution yesterday by asking me to encourage him not to return to Parliament. I cannot ask him this – he has already told me he does not wish to do that, and he has said so publicly in any case. But what prompted these friendsâ€™ requests to me is the continuing clamor for Raila Odinga to return to Parliament.

At one level this reaffirmation of peopleâ€™s support for Mr Odinga is wonderful to behold, and must also give him good solace at a time when he is personally grappling with a second loss of a presidency in very questionable circumstances. But this extended debate on his return to Parliament is distracting attention from so many other issues that Kenyans need to focus on at this time.

I too feel he would do much better if he is freed of the challenges of managing day-to-day politics and focuses instead on building his party as well as a national movement for change involving civil society, professionals, trade unionists and others. Njeri Osaak in her extended response yesterday also spelled out many good reasons why Parliament is not the right place for Raila anymore. Do read her posting.

Part of this clamour for Raila Odinga’s return to Parliament reflects a misunderstanding of our political system. One does not have to be in Parliament to influence this countryâ€™s direction and evolution. Railaâ€™s own father Jaramogi spent long periods out of Parliament but continued to be a powerful political force. A number of other Kenyans who fought against overwhelming odds under Kanu rule to give us the freedoms we now enjoy did so in their non-parliamentary lives.

There is no objective way to determine whether Raila can do more for us from within or outside Parliament. So that decision is entirely his, If this current campaign to convince him to change his position on this issue succeeds, I will not complain. But this discussion should end soon.