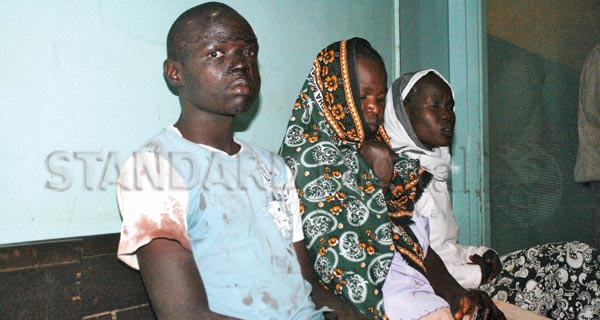 My fellow Kenyans, it is with a heavy heart that I open my thoughts to you today. I have not slept peacefully for the past few days in the wake of unfettered violence in Bungoma, Busia and Kakamega Counties. I was privileged enough to travel the breadth and width of our beautiful country accompanying the Rt Hon Raila Odinga during the election cycle and I became rather fond of Western Kenya. I came to discover the hidden richness of culture that the region has to offer. I watched the famed bullfights and participated in many Isukuti dances. I established several new friendships that I shall cherish for the rest of my life. However, I now find myself in the unenviable position of constantly worrying for their safety and welfare day and night.

Then, there is the similarly grave matter of Garissa. I first visited the great county two years ago at the invitation of a local philanthropist to conduct a charity medical mission targeted at the poverty-stricken community living around Charidende. It was love at first sight. I was instantly drawn to the way of life of the people of Garissa. This is why my heart aches at news reaching us of the incessant pillage and plunder of the homes of my fellow countrymen and women.

National security was a fundamental issue during the just concluded elections. It was flowered up and packaged as the “Peace First Campaign” or in Kiswahili “Amani Kwanza.” I remember the then Jubilee Presidential candidate and his running mate traversing the country selling the peace agenda as the cornerstone of their campaign. Dare I say that President Uhuru Kenyatta’s Presidency is based primarily on the mandate of peace! That much sought after state of being that has eluded many other African countries but fortunately enough, we as a people have managed to preserve in our country.

Kenyans and indeed the international community at large had held their collective breaths as we approached the polls. The dark cloud of the Post Election Violence that followed the last General Election still hung low over Kenya. The national sigh of relief was palpable when the elections came and went largely uneventfully.

This is why I must express my profound disappointment at President Kenyatta’s performance so far on this front. I put it to my President that he has failed Kenyans in this most sacred of regards. We are not safe. Neither in our minds, nor in reality. We are not enjoying the much touted peace that he promised! Ask my brothers and sisters in Bungoma, Busia, Kakamega and Garissa.

I was aghast to hear that he is departing for South Africa to attend the World Economic Forum the same day of his arrival from the United Kingdom. This, while President Goodluck Jonathan has abandoned his trip to the same event to personally take charge of the security situation in the Delta Region of Nigeria. I therefore pose the question, “Does President Jonathan care for Nigerians more than President Kenyatta cares for Kenyans?” As you ponder upon this, I leave you with some African folk wisdom: “You do not go to eat meat in your neighbor’s house when your home is on fire!”https://www.kenya-today.com/opinion/rising-insecurity-kenyans-in-bungoma-busia