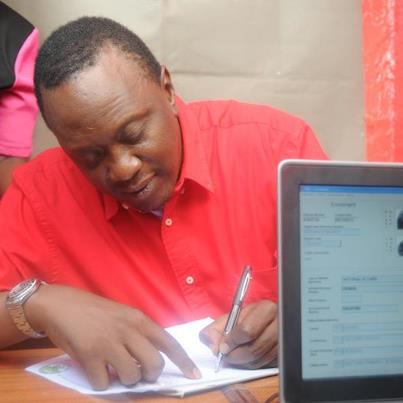 The Jubilee election juggernaut is awash with cash. Truth be told, Uhuru Kenyatta is a wealthy man. That notwithstanding, it is improbable that he would invest so much of his inheritance in a campaign. At least the no nonsense Matriarch and former first lady Mama Ngina would not countenance wastage of the family wealth

For the record, it is stated that he has at his disposal six branded choppers and 47 four wheel drive vehicles to conquer the roughest of terrains in the hunt for votes. That is not even counting the millions of shillings that he has spent to buy the support of key tribal lords, most prominently being William Ruto, who highly reliable sources claim he paid a whopping 3.8 billion Kenya Shillings. William Ruto will not care if the Jubilee ticket wins the elections or not. He is the new tycoon in town!

So where does all the money come from?

Mutahi Ngunyi was so sure at some point that Jubilee would support the Mudavadi candidacy that he promised to bet his consulting house on it. That was the wish of state house. When Cyrus Jirongo called Mudavadi a project, he knew what he was talking about. When Uhuru signed on the dotted line to relinquish his ambitions for Mudavadi, he meant it totally in good faith.

Suddenly, he made a 360 degrees turn and threw Mudavadi under the bus. Credit to Uhuru, he did not deny that he had agreed to sacrifice his ambitions for Mudavadi but blamed that decision to his supporters on the devil.

What pundits have not quite known is who the devil is. If indeed there was a devil, has it been exorcised? Some analysts thought the devil was Kibaki. Others suggested it was Mary Wambui, the Othaya Narc activist turned UDF and now TNA activist, while others limply offered that it was President Kibakiâ€™s private secretary Prof. Nick Wanjohi.

To the contrary, they were all wrong. The Demon is far bigger, much more powerful than they had imagined. The Demon is a world power: the Peoples Republic of China! Who would have thought this?

For a while now, scholars have been confounded by the rapid rise of China and its influence in the world. Its economy is booming and has been growing by double digits. China, thanks to its huge population has a huge market for goods while offering cheap man power which has fueled the economic growth. That explains Western industrialists offshoring operations to China mainland.

It has been suggested that in years to come, China will compete the US in pre eminence but it is still bogged down by such baggage as dictatorship, poor working conditions, huge income disparities, corruption and challenges related to the rule of law among others.

In Kenya and Africa in general, Chinaâ€™s influence has been felt. In Kenya, aside from the cheap low quality Chinese goods flooding our stores, its influence has lately been seen in the sector of infrastructure, the most enduring of which is the Thika super highway.

When Uhuru declared that he would not run, the red dragon was alarmed. In Uhuru Kenyatta, they had the best person in government to do business with. Already, they saw in Uhuru, the guy they could manipulate to dance to their tunes. China wants to do business with Africa to the exclusion of the West to perpetuate their competition particularly with the US and sustain their growth and quest for a new world order, not led by the US but by China!. As part of its strategy to court Africa, China has built an ultra modern head quarters for the AU in Addis, Ethiopia.

Part of the attraction in trading with China is that they donâ€™t put any conditions regarding human rights record, accountability when giving loans. They give loans and expect repayment. They donâ€™t care how the money they advance is spent at all.

The one million dollar question then is, is China good for Kenya?

Uhuru Kenyatta has lately adopted a belligerent, chest thumping and bullish tone in his references to the West. He has retorted that Kenya can look East if the West will not deal with an ICC indicted president! This bravado is informed by the Chinese lie to him that they can do business with us and trump the sanctions!

True, China is good but not at the expense of the West and certainly with other qualifications. Zimbabwe cooperates with China alright but because the West suspended aid to its government, Zimbabwe is poorer than the average slum dweller in Kibera. A whole country, previously prosperous during the glory days, now has only the equivalent of eighteen thousand Kenya shillings in its accounts! Where is China to salvage Zimbabwe?

Another one is North Korea. One word describes it: a reclusive hungry nation! Where is China to salvage it? Iran, another one of Chinaâ€™s friends is crumbling!

In Kenya, they have given us loans which thanks to corruption, have ended in individualsâ€™ pockets and not to finance the projects they were intended. The tragedy is that Kenyans have inherited that debt and will be the ones to pay. At least Britain demanded back its money on free primary education when doubts arose about how it was spent. The government knows it cannot misuse a grant given by the Brits. The average Kenyan is the winner in that scenario!

Number two, their cheap goods have flooded our markets, killing the local industry. As if that were not enough, Chinese nationals, thanks to impunity are now directly competing our poor folks in such small engagements as selling roast maize! Roast maize, can you believe that?

Third, we are losing our heritage, thanks to China. Poaching has been on the rise. The wanton slaughter of elephants and rhinos for ivory in our parks has escalated, thanks to Chinese hunger for ivory and their nationals who are increasingly flooding our streets, estates and sidewalks!

It will not be objective to blame China for all our woes but it helps to regulate our interactions with them. That requires a president that will not pander to their whims; a president with integrity who they will not be able to bribe. More importantly, China on its own cannot be our trading partner. We need a policy of inclusivity that embraces our traditional and time tested partners, the West! We cannot prosper on the basis of trade with China alone