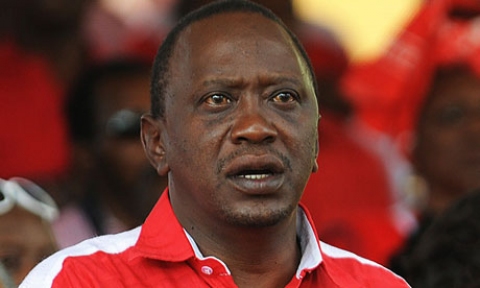 Uhuru Kenyatta is to blame for the looming revolution in Kenya
By Jim Bonnie
Mistake me not! I am not shifting any blame. Neither am I attempting to divert Kenyans’ attention from the “hot” issues making their lives unbearable or a “living hell” if you wish to say so. I am calling a spade a spade not a “mother spade”. I also want to hold the bull by its horns, aware of the consequences. So, clear the warning signs if there is any. I am on full headlights.

I will squarely blame Uhuru Kenyatta if Kenyans jam our streets in protest against the current regime. One thing I am sure of, I won’t be left out and I won’t shy away from joining my colleagues in demanding for our rights. Nobody will coerce me, nobody will bribe me, but I will join whole-heartedly.

May be you are wondering and questioning my reasons for participation in case a revolution “explodes”. Ok. Depending on your tribal tag, political affiliation and/or the size national cake you possess; you will either side with me or dismiss my “petty” reasons. Whichever the case, as long as I have driven my point home, I don’t give a damn!

I want to point out some issues which if you belong to the “tyranny of numbers” gang, you will consider petty. Look at how Uhuru Kenyatta is championing tribalism. I occasionally watch him fooling Kenyans of his commitment to fight tribalism. This is a hoax. He only want to win public support, sympathy and attention while on a thorough scrutiny, he is doing the direct opposite – deceiving innocent onlookers.

Probably that doesn’t make any sense to you. What about the public appointments? Aren’t they skewed towards two communities – majorly Kikuyu to be precise? Why should two tribes get the lion’s share of all public appointments? Is it because you share blood? Isn’t it a continuation of Kibaki legacy? If you study the Egyptian revolution, it was sparked by among other things, Mr. Morsi’s rotten practice of appointing his cronies, relatives and tribsmen and women to major government plum jobs; nothing short of what Uhuru has inherited.

Isn’t this not replicated in Kenya? We have a situation where forty tribes are treated as servants while two tribes are superior and they are the masters. Why should I be governed by and pay taxes to a government that is insensitive to my rights as a human being? You don’t need expert knowledge to understand this! You don’t even need spiritual intervention to see the reality. Unless you are insane.

A situation where there is no distinction between the executive, other arms of government and independent institutions and commissions is disquieting, ludicrous and startling. Justice is sold to and bought by the highest bidder. If not, how do you explain a scenario where William Ruto, the Deputy President, steals an IDP’s land and gets away with it?

We are again witnessing the re-emergence of political intimidation, harassment and terrorising of opposition leaders. With the onset of digital generation, these archaic, antiquated acts appear absurd. The problem with Kenya is that we are ruled by two dictators who think and assume that being digital is to carry smart phones around and copy Obama in speech and behaviour. I wonder why the ICC couple neglect Obama’s leadership practice!

Taxing the earlier zero rated commodities which only serves to burden the hoi polloi is a recipe for revolt. ” A hungry stomach is not a good political advisor”, oh, and this was Albert Einstein. Saida Hagi-Dirie Herzi’sÂ Government by Magic Spell,a book, Â Halima – a lady possessed by a Jini at a tender age – advised her clan, who she assisted to grab power, to starve their subjects so that they spend most of their time looking for food rather than scrutinizing and criticizing the government. We can’t allow this stupidity in Kenya.

It is common sense that Uhuru is making our lives unbearable. Nepotism is at its peak. Several regions in Kenya feel alienated, abandoned and neglected. The government has adopted the rule of the clenched fist. It’s not going to be possible this time round. We have had enough from Jomo, Moi and dictator Kibaki.

If and when it will be appropriate, Kenyans will speak in a voice that Uhuru and TNA leadership will understand best. When that time comes, soon, I will honestly put on my boots. Don’t ask me what I will do. Walls have ears. Wait for that time – like the second coming of the Messiah, it’s neigh. But one disdainful man must bear the blame for not putting things right – Uhuru Kenyatta -president of two tribes.

Jim Bonnie is a prolific writer on socio-politico issues and a political strategist: mcaugo@gmail.com